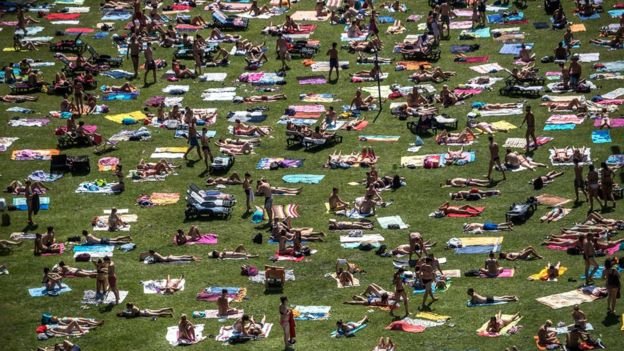 Parts of Europe are experiencing their most extreme heat in more than a decade as temperatures hit 44C (111 F).

Several countries have issued health warnings as this week’s record-breaking weather conditions continue to affect swathes of the continent.

Sweltering temperatures in Italy have sparked wildfires, and dozens of towns and cities are on the health ministry’s maximum heat alert.

The heatwave has left some regions facing the threat of severe drought.

Health warnings are in place in the parts of Europe where temperatures have reached potentially dangerous levels.

Italy is currently experiencing temperatures 10C higher than the average for this time of year.

On Wednesday, the mercury rose to 44C in Sardinia.

On Thursday, temperatures hit 43C near Rome while Sicily recorded 42C as a blanket of hot air from Africa swept through the Mediterranean.

Tourists and locals have been cooling off in cities across southern Europe by dousing themselves in water from public fountains and walking the streets under the shade of parasols.

High temperatures are expected in parts of central Europe and the Balkans in the coming days, according to Meteoalarm.

The heatwave is expected to last until at least Monday, with health warnings issued in 26 European cities.