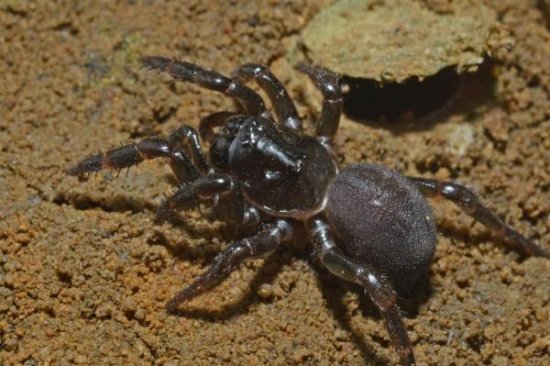 New research suggests trapdoor spiders crossed the Indian Ocean to get from Southern Africa to Australia.

The trapdoor spider, Moggridgea rainbow, is only found on Kangaroo Island off the coast of South Australia. All of the other species in the genus are located in South Africa.

Until now, scientists thought the trapdoor spider diverged from closest relatives when Africa and Australia were still connected — prior to the breakup of the supercontinent Gondwana some 85 million years ago.

New genetic analysis of the trapdoor spider and its relatives suggests the species actually split off and formed its own branch on the family tree between 2 and 16 million years ago, well after the separation of Australia from Africa and before humans arrived Down Under.

The revelation — detailed this week in the journal PLOS ONE — suggests the spiders managed to cross the Indian Ocean.

Trapdoor spiders are named for the predation technique, building a tiny trapdoor in the dirt, which they pop out of to ambush prey at night. When trapdoor spiders hatch, they move only a few feet from where they were born to set up shop.

And yet, the research suggests they made the journey across an ocean a few thousand miles across.

“At first thought, this does seem incredible,” Andrew Austin, a professor at the University of Adelaide, said in a news release. “But there are precedents of such ocean travel. Moggridgea are also found on the Comoros volcanic islands, 340 km from mainland Africa, however this is a relatively short distance compared with the 10,000 km from South Africa to Kangaroo Island.”

Scientists hypothesize that a colony of trapdoor spiders likely drifted across the ocean when a large chunk of land and vegetation broke away from the coast and drifted to sea.

“The burrows they live in are quite stable and they would have been quite secure in their silk-lined tubes with their trapdoors closed — it was probably quite a safe way to travel,” said Sophie Harrison, PhD candidate at the University of Adelaide and lead author of the new study.