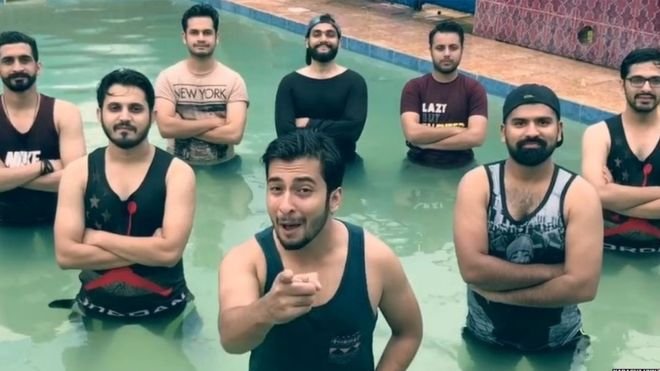 A popular Indian folk song with many satirical takes has gone viral in Pakistan after a group parodied it to comment on recent political turmoil.

Karachi Vynz wrote and filmed an Urdu version of the Marathi language song Sonu, to speak about the resignation of former prime minister Nawaz Sharif.

Mr Sharif quit after the Supreme Court disqualified him from office in July.

The songs lyrics “Immu hame aap pe bharosa sahi thaa” translate from the Urdu to “we were right to trust you Immu”.

Immu, of course refers to Imran Khan, the former captain of the Pakistan cricket team and now president of the political party Pakistan Tehrik-e-Insaf (PTI)

“We aim to make people happy,” band founder Mansoor Qureshi told the BBC on the phone from Karachi.

Mr Qureshi says he formed Karachi Vynz with a group of friends in 2014. They describe themselves as a group of freelance comedians who want to make videos go viral.

“We keep tabs on what is happening on social media to get something exciting. We then play with it to make funny, interesting and amusing content for our viewers,” he added.

And despite the references to Imran Khan, Mr Qureshi said they were not supporting one politician over another, explaining that Mr Khan’s popularity on social media made him a good subject for the song.

The song had gained more than a million views on You Tube and Facebook at the time of writing.

Supporters of both politicians have left thousands of comments on the video, which was posted days after the Pakistani Supreme Court disqualified Prime Minister Nawaz Sharif from office last week.

The ruling came after a probe into his family’s wealth following the 2016 Panama Papers dump linking his children to offshore companies.

Their latest offering is inspired by the Marathi (language spoken in Maharashtra) folk song ‘Sonu’ which has gone viral in various local Indian languages.

In one version, a popular radio presenter used the song to highlight the problem of Mumbai’s potholed roads.