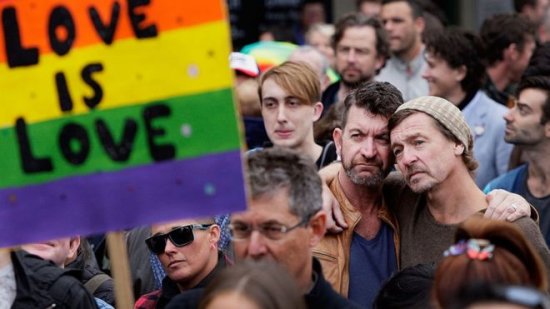 Australians have considerably increased their support for same-sex marriage in the last decade, a report has found.

The wide-ranging survey found that 67% of women and 59% of men want to see same-sex marriage made legal in Australia.

“It is quite clear that community sentiment has shifted in favour of marriage equality,” he told the Australian Broadcasting Corp.

Debate over legalising same-sex marriage has intensified in Australia this week amid speculation that a government MP may soon introduce a bill to parliament.

However, Australia’s ruling conservative Coalition is split on the issue, and any push to legalise same-sex marriage is likely to encounter opposition.

The Household, Income and Labour Dynamics in Australia report is a wide-ranging annual survey commissioned by the government and run by the University of Melbourne.

On attitudes to marriage and children, it measured data between 2005 and 2015 and found most attitudes had become more progressive.

It used a scale of one (strongly disagree) to seven (strongly agree).

Other key findings from the survey included that Australian wages have stagnated in recent years, people are living at home for longer, and child poverty in single-parent families is on the rise.

Last year, a government push for Australians to vote on legalising same-sex marriage in a national plebiscite was blocked by the opposition and minor parties.

Opponents of the plebiscite did not necessarily oppose legalisation, but said the vote would be costly and fuel hate campaigns. They argued the issue should be put to a parliamentary vote.