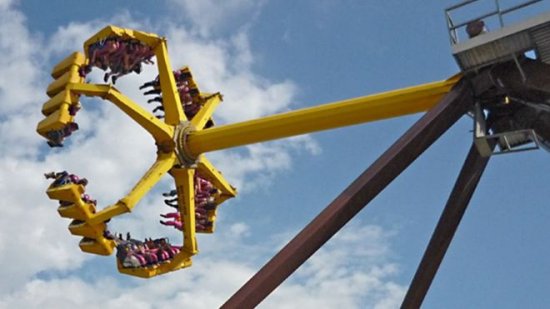 Five high-speed theme park rides have been shut across the UK after a death on a similar attraction in the US.

An 18-year-old man died and three others were critically injured after being flung from the ride at the Ohio State Fair on Wednesday.

The ride, known as the KMG Afterburner, swings at high speed from side-to-side while also spinning passengers.

The Health and Safety Executive ordered the re-inspection and temporary closure of similar rides in the UK.

Four of the rides closed are in theme parks at Lightwater Valley in North Yorkshire, Pleasurewood Hills in Suffolk, Coney Beach in South Wales, and Brean Theme Park in Somerset.

The fifth ride is owned by Joseph Manning in Hertfordshire.

Unverified footage from Wednesday’s accident in Colombus shows one passenger carriage breaking loose near the bottom of its pendulum swing, tossing passengers into the air as it rose again.

An HSE spokeswoman said all five rides in the UK had been “thoroughly inspected within the last 12 months”, but there was no “verified information” on the cause of the fatal accident in the US.

As a result the body had served an enforcement notice on the machines, which takes them out of use.

Ripon-based theme park Lightwater Valley is telling customers that its ride, called the Eagle’s Claw, is closed “due to circumstances beyond our control”.

A spokesman said: “We were deeply saddened and shocked to hear of the tragic accident in the US and our thoughts go out to the families of those concerned.”

He added that although there are “fundamental and significant differences” between the ride at Lightwater and the one in Ohio, the park “entirely supported” the HSE’s decision to close similar rides.