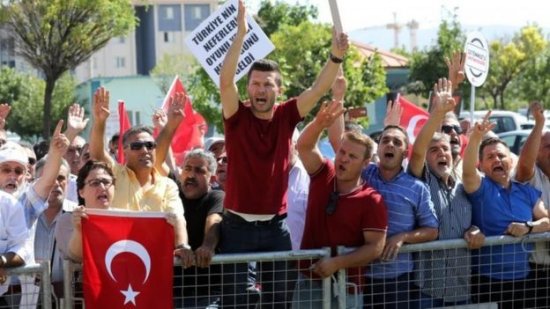 Almost 500 people arrested after last year’s failed coup in Turkey have appeared in court accused of taking part in the plot.

Some of the handcuffed defendants were jeered as they were individually escorted into court by police and armed guards in front of TV cameras.

The trial focuses on events at the Akinci airbase which it is alleged was the plotters’ headquarters.

It is taking place in a purpose-built courtroom outside the capital Ankara.

The defendants face charges from attempting to assassinate the president to murder. As some arrived at court they were met by protesters chanting “We want the death penalty!”

Some of the demonstrators had relatives killed or injured during the coup attempt and threw nooses towards the suspects.

Military chief Gen Hulusi Akar and other senior officers were held hostage at the base for several hours on the night that the coup took place.

The trial is the largest yet relating to the coup. Anyone convicted is expected to get life imprisonment.

Although Turkey abolished the death penalty in 2004, President Recep Tayyip Erdogan proposed a referendum on the issue in his speech after narrowly winning a vote to expand his powers in April.

The president has been increasingly supportive of a reintroduction of capital punishment since the failed coup.

But the EU has made clear that any such move would effectively bring an end to Turkey’s negotiations to join the bloc.

Last July, orders were allegedly sent out from Akinci air base, north-west of Ankara, to bomb parliament as troops attempted to oust President Erdogan.

In the aftermath of their botched attempt, thousands of people have been arrested, many suspected of having links to Fethullah Gulen, a cleric living in exile in the US.

Mr Erdogan’s critics say he is using the purge that followed the coup to stifle political dissent.

Mr Gulen – the key figure accused in the case – is among those being tried, albeit in absentia. He denies the charges.

Other notable figures include: