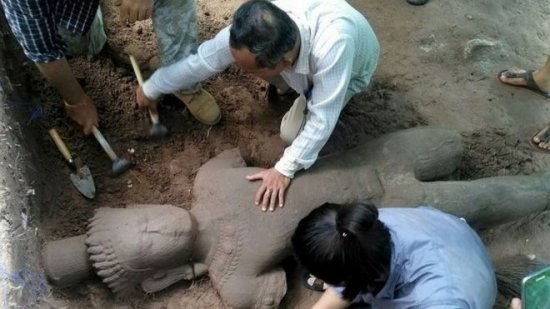 Archaeologists at Cambodia’s celebrated Angkor Wat temple complex have unearthed a large statue believed to date back to the late 12th century.

The 2m (6.5ft) sandstone human figure probably functioned as a guardian who stood at the entrance to an ancient hospital, researchers say.

The Cambodia Daily described Saturday’s find as “like something that only happens in the movies”.

Angkor Wat is one of south-east Asia’s most popular tourist destinations.

Last year the complex – which was built over different periods of the Khmer empire from the ninth to the 15th centuries – attracted about 2.5 million visitors.

But many of the complex’s most valuable items have been looted.

Experts say that is why the latest find is so extraordinary and is the most important statue to have been found at Angkor in recent years.

Archaeologists found the statue buried 40cm (16in) underground while excavating a hospital built during the reign of King Jayavarman VII who reigned from 1181 to around 1220.

The king had a reputation for social programmes, with the hospital being one of the most prominent.

The statue’s arms and legs are broken but engravings on its body and head can still clearly be seen.

Experts say the hope now is that other objects will be unearthed at the site so that more information can be gleaned on the lifestyles of people of the era.

Historian Rethy Chhem told the Cambodia Daily that the hospital is one of four built in the area, none of which has been properly excavated.

Each hospital contained various statues of divinities, he said, the most prized of which was a statue of the Medicine Buddha.

“We would hit gold if we found the statue of the Buddha,” Dr Chhem said.

Most Buddha statues were destroyed during Jayavarman’s reign as part of his push to reintroduce Brahmanism. Many of those that were not damaged were looted, although it is thought some were buried so they could be preserved.