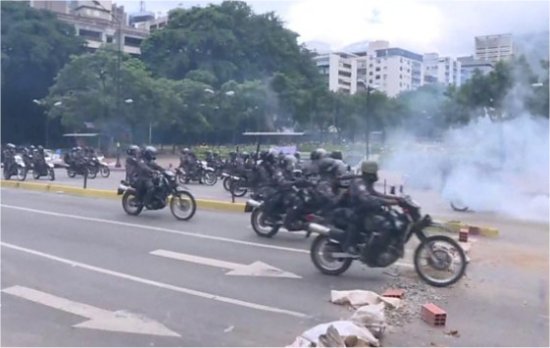 A candidate in Sunday’s assembly elections and an opposition activist have been killed in Venezuela.

The killings took place before voting started to elect a new assembly with powers to rewrite the constitution.

The opposition says it is a power grab by President Nicolás Maduro and is boycotting the vote.

The government says the constituent assembly is the only way to bring peace back to the country after months of violent protests.

José Felix Pineda, a 39-year-old lawyer running in the election, was shot in his home on Saturday night local time, a senior Venezuelan minister said.

Ricardo Campos, a youth secretary with the opposition Acción Democrática party, was shot dead during a protest, the head of the national assembly said.

The El Nacional newspaper said 10 people had been killed across Venezuela in the past 24 hours.

El Universal reported at least three other men were killed in protests in Merida, in the west of the country.

Protests have continues in defiance of a ban on them taking place. An explosion near one demonstration in Caracas injured several police officers and set a number of their motorbikes on fire.

The security forces have used armoured vehicles to dispel protesters in the Caracas district of El Paraíso amid the sound of gunfire, AFP says, citing local reports.

“Even if they win today, this won’t last long,” opposition supporter Berta Hernandez, a 60-year-old doctor, told Reuters in Caracas. “I’ll continue on the streets because, not long from now, this will come to an end.”

In a speech broadcast on TV, the president predicted a “big victory”, calling the vote “the most important election held in Venezuela’s political system”.

However, electoral council chief Tibisay Lucena acknowledged that some voting machines had been attacked and burned in parts of the country.

Four months of protests against Mr Maduro and his plans for the assembly have left more than 100 people dead.

The election has been heavily criticised by other Latin American countries as well as the European Union and the United States, which last week imposed new sanctions on members of Mr Maduro’s government.

Venezuela, a major oil producer, is gripped by a political crisis, with soaring inflation and daily food shortages.

Many residents in Caracas were stocking up on essential items on Saturday in case unrest left shops closed into Monday, correspondents said.