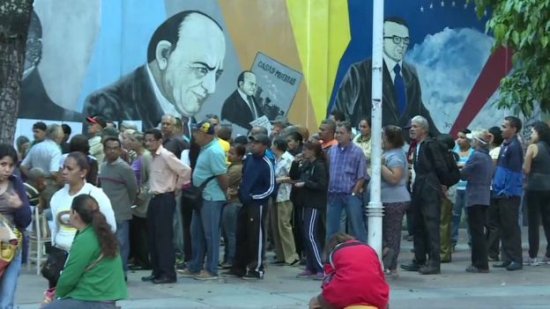 Voting is under way in Venezuela to elect a new assembly with powers to rewrite the constitution.

The opposition is boycotting the vote which it says is a power grab by President Nicolás Maduro.

The government says the constituent assembly is the only way to bring peace back to the country after months of violent protests.

On the eve of the vote, protesters blocked roads in the capital Caracas in defiance of a ban on demonstrations.

In a speech broadcast on TV, President Maduro predicted a “big victory”, calling the vote “the most important election held in Venezuela’s political system”.

However, electoral council chief Tibisay Lucena acknowledged that some voting machines had been attacked and burned in parts of the country.

Oil-rich Venezuela is gripped by a political crisis with soaring inflation and daily food shortages. Violent demonstrations since April have left more than 100 people dead.

Many residents in Caracas were stocking up on essential items on Saturday in case unrest left shops closed into Monday, correspondents said.

More than 6,000 candidates are standing for the 545-member constituent assembly but none are from the opposition.

The new body will have the power to bypass the National Assembly, currently controlled by an alliance of opposition parties.

Turnout and the number of spoilt ballots will be watched closely as an indication of how much support there is for the assembly.

A poll by Datanalisis suggested that over 70% of Venezuelans were opposed to the new assembly – but the government has said it is confident that millions will take part in the vote.

Neighbouring Colombia has said it will not recognise the constituent assembly. France, Spain, the US and the EU have also urged the government to cancel the vote, but to no avail.

Opposition leaders urged their supporters to erect barricades on Sunday and pledged to fight on even after the election.

“Starting on Monday we will have new actions, tactics and strategies to fit the new reality we will be living in,” said Freddy Guevara of the opposition MUD alliance, without giving details.

“This is a tough, conflictive time that we did not look for but that will only hasten the fall of this government.”

In an effort to create calm ahead of the vote, the government imposed a ban on protests and threatened jail terms for anyone flouting it.

Amid fears of worsening unrest, families of US diplomats have been ordered to leave Venezuela and several foreign airlines have suspended flights.