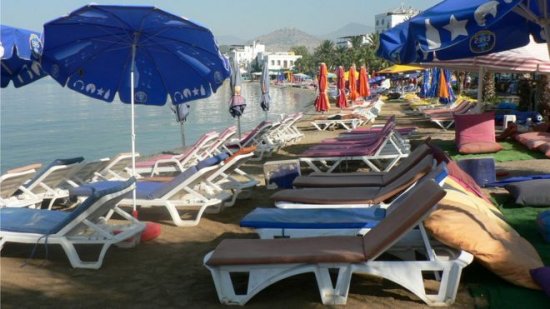 A teenager has been killed and four other people wounded in a shooting near two nightclubs at a popular resort in Turkey, local media report.

A gunman approached the beach clubs in Bodrum, on Turkey’s Aegean coast, before firing shots at random, the Hurriyet Daily News reports.

Hundreds of people were said to have been in or near the clubs at the time of the attack early on Sunday morning.

A manhunt is underway for the suspect, who reportedly fled the scene in a car.

The victim, who has been identified as 18-year-old Furkan Say, was shot many times and later died at a local hospital, according to CNN Turk.

Mr Say was a member of staff at the Sess Beach Club, one of the two venues. Two other staff members at the club were also injured, along with two members of the public.

One eyewitness, Gokhan Balci, told Hurriyet news that the suspect entered the Sess Beach Club before “moving away” and “randomly opening fire”.

“We lived a nightmare,” he said.

The identity of the suspect is not yet known and the motive for the attack is unclear.

Security has been heightened at nightclubs in Turkey after Uzbek national Abdulkadir Masharipov killed 39 people in a mass shooting at the Reina club in Istanbul on New Year’s Eve in 2016.

Citizens of Israel, France, Tunisia, Lebanon, India, Belgium, Jordan and Saudi Arabia were among the victims.