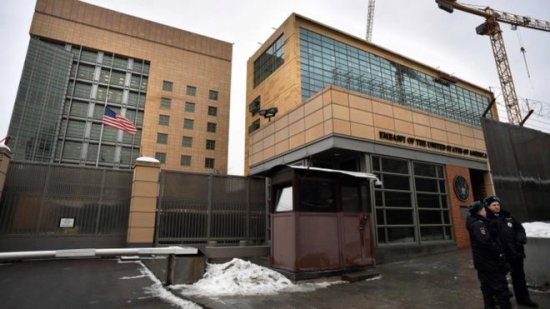 Russian President Vladimir Putin has announced that 755 staff must leave US diplomatic missions, in retaliation for new US sanctions against Moscow.

The decision to expel staff was made on Friday, but Mr Putin has now confirmed the number who must go by 1 September.

It brings staff levels to 455, the same as Russia’s complement in Washington.

This is thought to be the largest expulsion of diplomats from any country in modern history, says the BBC’s Laura Bicker in Washington.

Mr Putin did strike a conciliatory note, saying he did not want to impose more measures, but also said he could not see ties changing “anytime soon”.

Mr Putin told Russian television: “More than 1,000 people were working and are still working” at the US embassy and consulates, and that “755 people must stop their activities in Russia.”

Russia has also said it is seizing holiday properties and a warehouse used by US diplomats.

Mr Putin suggested he could consider more measures, but said: “I am against it as of today.”

He also noted the creation of a de-escalation zone in southern Syria as an example of a concrete result of working together.

However, in terms of general relations, he added: “We have waited long enough, hoping that the situation would perhaps change for the better.

“But it seems that even if the situation is changing, it’s not for anytime soon.”

The new US sanctions were in retaliation both for Russia’s annexation of Crimea in 2014 and Russian interference in the US election.

In December, the Obama administration ordered the seizure of two Russian diplomatic compounds and expelled 35 Russian diplomats in response to alleged hacking of the US Democratic Party and Hillary Clinton’s campaign.

The new US sanctions on Russia were overwhelmingly approved by both houses of Congress despite objections from the White House.

US intelligence agencies believe Russia tried to sway the election in favour of President Donald Trump and now there are several investigations looking into whether anyone from his campaign helped.

Russia has always denied interfering and Mr Trump insists there was no collusion.