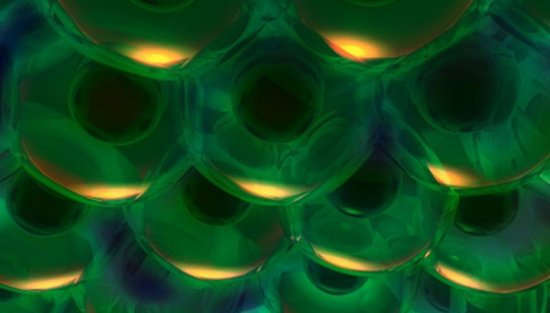 Researchers have previously hypothesized that Titan’s atmosphere featured acrylonitrile, but this is the first time scientists have directly detected the chemical.

On Earth, acrylonitrile, or vinyl cyanide, is used in plastics manufacturing. On Titan, scientists believe the compound could form a flexible but stable structure similar to the lipid bilayers the makeup cell membranes on Earth.

Acrylonitrile’s chemical signature was found in Titan’s stratosphere, but its concentration — 2.8 parts per billion — is great enough to reach the moon’s surface.

Titan’s chemical diversity has long intrigued scientists. Researchers believe the moon has many of the building blocks for life, but it’s harsh conditions would prove deadly for the cells of Earth’s plants and animals.

However, a different type of membrane — one unique to the dangers of Titan’s climate — might successfully protect living cells. Acrylonitrile, scientists say, could form such a membrane. Scientists dubbed the alternative membrane layers “azotosomes.”

“The ability to form a stable membrane to separate the internal environment from the external one is important because it provides a means to contain chemicals long enough to allow them to interact,” Michael Mumma, director of the Goddard Center for Astrobiology, said in a news release. “If membrane-like structures could be formed by vinyl cyanide, it would be an important step on the pathway to life on Saturn’s moon Titan.”

Researchers detailed the analysis of Titan’s vinyl cyanide this week in the journal Science Advances.

“The detection of this elusive, astrobiologically relevant chemical is exciting for scientists who are eager to determine if life could develop on icy worlds such as Titan,” said Goddard scientist Martin Cordiner. “This finding adds an important piece to our understanding of the chemical complexity of the solar system.”

Signal may be from first ‘exomoon’