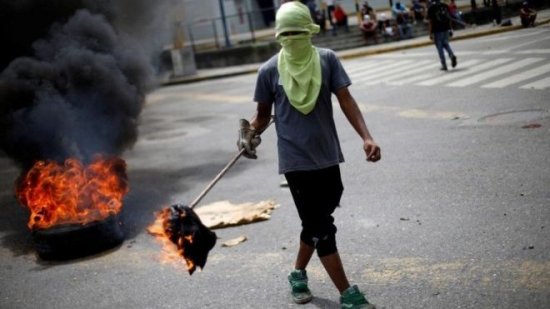 Venezuela is banning protests that could “disturb or affect” Sunday’s controversial election for a new constituent assembly.

Prison terms of between five and 10 years could be imposed on those contravening the ban, Interior Minister Néstor Reverol said.

More than 100 people have been killed since April, in violence linked to protests against the assembly.

The opposition sees it as a move towards dictatorship.

A 48-hour general strike is currently taking place and the opposition has vowed to go ahead with a mass protest on Friday, despite the measure.

The ban on activity will be in force from Friday until Tuesday.

The new constituent assembly, comprising 545 members, will rival the National Assembly, currently controlled by the opposition, and will have the power to rewrite the constitution.

President Nicolás Maduro justifies the new institution as a way of bringing peace back to the divided nation.

On Wednesday, the US imposed sanctions on 13 senior Venezuelan officials, including Mr Reverol.

The sanctions freeze the US assets of those targeted and stop American entities from doing business with them.

Mr Maduro responded by describing the US as imperialists bent on ruling the world and called the sanctions “illegal, insolent and unprecedented”.