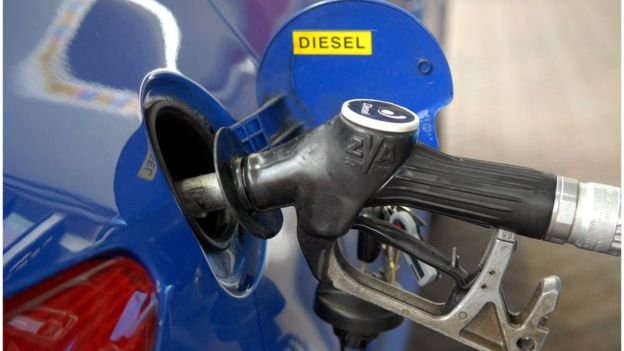 New diesel and petrol cars and vans will be banned in the UK from 2040 in a bid to tackle air pollution, the government is set to announce.

Ministers will also unveil a £255m fund to help councils tackle emissions from diesel vehicles, as part of a £3bn package of spending on air quality.

Campaigners said the measures were promising, but more detail was needed.

They had wanted government-funded and mandated clean air zones, with charges for the most-polluting vehicles to enter areas with high pollution, included in the plans.

After a protracted legal battle, the government was ordered by the courts to produce new plans to tackle illegal levels of harmful pollutant nitrogen dioxide.

Ministers had to set out their draft clean air strategy plans in May, with the final measures due by 31 July.

Local measures could include altering buses and other transport to make them cleaner, changing road layouts, altering features such as speed humps, and re-programming traffic lights to make vehicle-flow smoother.

It is thought ministers will consult on a scrappage scheme later this year, but there is no firm commitment.

Ministers have been wary of being seen to “punish” drivers of diesel cars, who, they argue, bought the vehicles after being encouraged to by the last Labour government because they produced lower carbon emissions.

The UK announcement comes amid signs of an accelerating shift towards electric cars instead of petrol and diesel ones, both at home and abroad:

Air pollution is thought to be linked to about 40,000 premature deaths a year in the UK, and transport also contributes to greenhouse gas emissions.

A government spokesman said poor air quality was “the biggest environmental risk” to public health in the UK.

“This government is determined to take strong action in the shortest time possible,” he said.

“Our plan to deal with dirty diesels will help councils clean up emissions hotspots – often a single road – through common sense measures which do not unfairly penalise ordinary working people.”

The measures are “good” in the long term but “not very effective” in the short, industry expert David Bailey said.

“This sets a very clear direction of travel, but petrol and diesel cars won’t exist by 2040,” he said.

But he said more incentives were needed now, otherwise urban air quality would not improve.

Its chief executive James Thornton said the law said ministers must bring down illegal levels of air pollution as soon as possible, so any measures must focus on that

Labour said the government was only acting after being taken to court.

Environment, Food and Rural Affairs spokeswoman Sue Hayman MP said the government had a “squeamish” attitude to clear air zones, and was shunting the problem on to local authorities.

“With nearly 40 million people living in areas with illegal levels of air pollution, action is needed now, not in 23 years’ time,” she said.

Related Topics:EuropeNew diesel and petrol vehicles to be bannedUK
Up Next