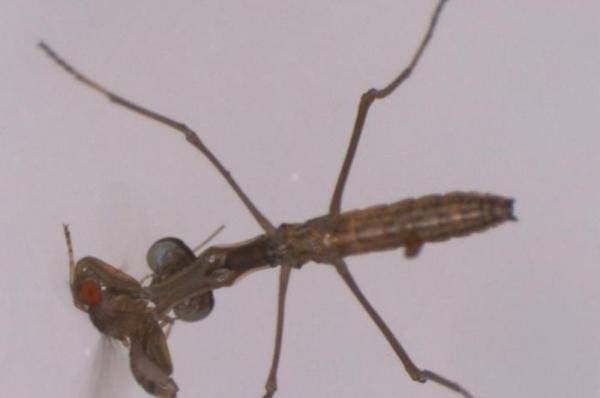 New research highlights the immense power of fear. The emotion was strong enough to curb eating and reproduction among groups of fruit flies, increasing the likelihood of extinction.

Scientists at Canada’s McGill University exposed fruit flies to a pheromone produced by praying mantises, one of the species main predators. The smell was enough to inspire fear. Fruit flies exposed to the pheromone were most cautious. The flies also spent less time eating and reproducing, yielding fewer offspring.

In the lab, fruit fly populations affected by fear quickly declined and were unable to rebound. The presence of a praying mantis’ scent boosted the chance of extinction by a factor of seven.

As prey numbers decline, predators should theoretically move onto other species. But the latest findings, detailed this week in the journal Proceedings of the Royal Society B, suggest predators don’t have to actually feed on a species in order to greatly influence its health and abundance.

“The scent is sufficient to continue population decline, then even if the predators move on to other prey, and their scent disappears, this is unimportant for the survival of the population that is at risk whose numbers and reproductive ability have been critically affected by the passing smell of death,” Kyle Elliott, an assistant professor at McGill, said in a news release.

Species abundance tends to precipitate decline, as competition for resources and mates grows more intense. The phenomenon is known as the Allee effect, named for its discoverer Walter Clyde Allee. Many scientists assumed the opposite of the Allee effect holds true for small populations. But the latest findings show small populations don’t always grow quickly — or even rebound at all. Fear may explain the anomaly.

“We suggest that the fear effects become more pronounced as population size declines and lead to reduced resilience in small populations and an increased likelihood of extinction,” Elliott said.

Astronomers detail additional evidence of water inside the moon