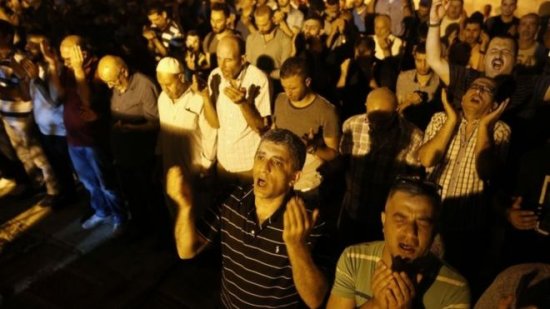 Palestinian leader Mahmoud Abbas says he will maintain a freeze on contact with Israel, despite the removal of metal detectors at a sensitive religious site in East Jerusalem.

The installation led to deadly clashes and uproar from Palestinians who saw it as an Israeli attempt to assert control over the site.

Israel said it was necessary to prevent weapons being smuggled in.

It says it now has plans to replace them with less obtrusive surveillance.

Both sides are under pressure from the international community to resolve the row over the holy site, known to Jews as the Temple Mount and Muslims as Haram al-Sharif.

The UN’s Middle East envoy has called for tensions to be eased ahead of Friday prayers – which tend to draw thousands of worshippers – or they risk spreading “well beyond” the ancient city.

Security measures changed after two Israeli policemen were killed by Israeli-Arab gunmen at the hilltop site on 14 July.

After a temporary two-day closure, the site was reopened with new metal detectors at the entrances, sparking a boycott of the compound with many Palestinians praying in the streets outside the Old City instead.

In the days that followed, four Palestinians were killed in clashes with Israeli security forces in East Jerusalem and the occupied West Bank, while three Israeli civilians were stabbed to death by a Palestinian who said he was avenging the new security measures.

Amid international concern over the rising tensions, the office of the Israeli prime minister said on Tuesday that it would replace the detectors with “advanced technologies and other means”.

New measures would be put in place over the next six months, with extra police deployed until then, it added.

According to Reuters news agency, crews were seen removing the detectors and recently-installed cameras early on Tuesday.

But President Abbas and the senior Muslim cleric who oversees the compound have dismissed the changes, calling for measures to go back to what they were prior to the attack more than ten days ago.

The Palestinian leader said this was necessary “so things can go back to normal in Jerusalem and we can resume our work regarding bilateral relations”.

He said a government freeze on co-ordination with Israel, including on security issues, over the controversial security measures would remain in place.

The Waqf religious body that runs the site also said Muslim worshippers would continue their boycott of the sacred compound and pray instead on the streets outside.