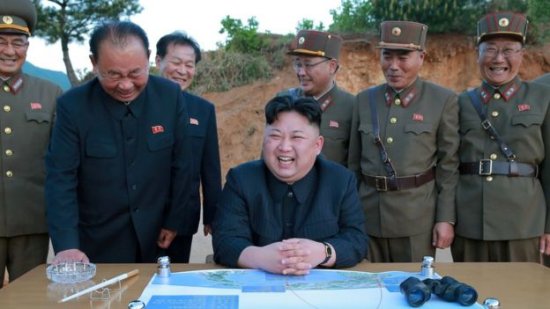 North Korea threatened Tuesday that it would “strike a merciless blow” at the heart of the United States with a “nuclear hammer” — if the U.S. government ever attempted to remove Kim Jong Un from power in Pyongyang.

A North Korean foreign ministry spokesman made the statement though the state-owned Korean Central News Agency.

“Should the U.S. dare to show even the slightest sign of attempt to remove our supreme leadership, we will strike a merciless blow at the heart of the U.S. with our powerful nuclear hammer, honed and hardened over time,” the foreign ministry said. “The likes of [CIA Director Mike] Pompeo will bitterly experience the catastrophic and miserable consequences caused by having dared to shake their little fists at the supreme leadership.”

The threat follows remarks from Pompeo last week, in which he said “it would be a great thing to denuclearize the peninsula.” He noted that the “most dangerous” variable is “the character who holds the control over them today” — a reference to Kim.

The CIA director said he wasn’t calling for Kim’s removal, only that the United States prefers to “find a way to separate that regime from” nuclear weapons capacity.

“From the administration’s perspective, the most important thing we can do is separate those two. Right? Separate capacity and someone who might well have intent and break those two apart,” Pompeo said during a forum in Aspen.

“North Korean people I’m sure are lovely people and would love to see [Kim] go,” he added.

In its statement Tuesday, North Korea’s foreign ministry said it “has now become clear” that the ultimate goal of President Donald Trump’s administration is regime change for Pyongyang.

“The first and foremost mission of our revolutionary armed forces with the nuclear force as their backbone is to defend the leader at the cost of their lives,” the ministry said, adding that North Korea is legally able to “preemptively annihilate those countries and entities” that threaten the country’s leadership.

Amid the escalating tensions between the United States and North Korea, the Chinese military has begun fortifying China’s 880-mile border with the hermit kingdom to prepare for a possible crisis, such as a potential U.S. military attack.