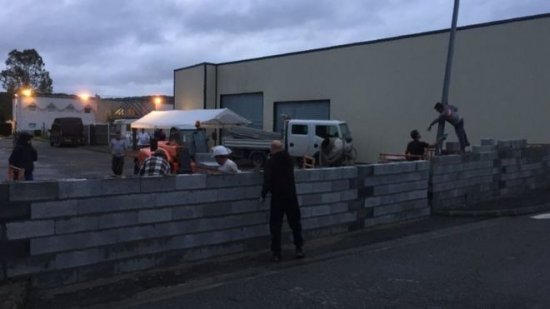 Protesters in a south-western French town have built a wall around the entrance to a former hotel to prevent it being used as a migrant shelter.

Dozens of residents of Séméac erected a barrier 18m long and 1.8m high around the Formule 1 hotel.

They said the local authorities had failed to discuss with town residents the plan to house up to 85 migrants in the building.

The authorities have not yet responded to the construction of the wall.

The protesters worked late into the evening to put up the barrier in the town in the Pyrenees mountains.

“We not against taking in migrants. But you have to take account of the citizens,” Laurent Teixeira, a spokesman for the group, told AFP news agency.

They warned that the small town – with a population of about 5,500 people – would simply be unable to cope with the migrants.

The disused hotel in Séméac is one of dozens of similar buildings around France bought by the state to house migrants, many of whom currently sleep rough on the streets.

In 2015, France offered asylum to 20,630 refugees, according to statistics agency Eurostat.