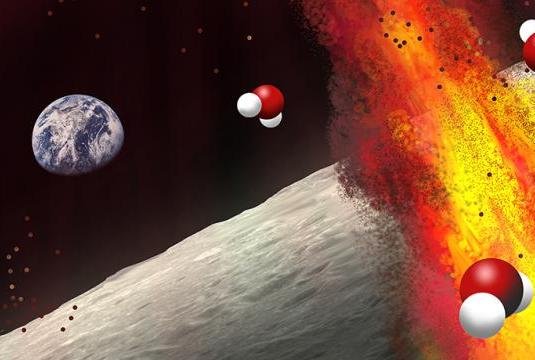 New analysis of ancient volcanic grains on the moon suggests the lunar mantle is surprisingly rich in water.

When astronomers used satellite observations to survey the grains from volcanic deposits across the lunar surface, they found higher concentrations of trapped water.

In 2008, scientists identified water in volcanic glass beads collected from the moon during the Apollo 15 and 17 missions. Follow-up analysis in 2011 showed lunar deposits featured as much water as basalt rock samples on Earth.

“The key question is whether those Apollo samples represent the bulk conditions of the lunar interior or instead represent unusual or perhaps anomalous water-rich regions within an otherwise ‘dry’ mantle,” Ralph Milliken, an associate professor of planetary sciences at Brown University, said in a news release. “By looking at the orbital data, we can examine the large pyroclastic deposits on the moon that were never sampled by the Apollo or Luna missions. The fact that nearly all of them exhibit signatures of water suggests that the Apollo samples are not anomalous, so it may be that the bulk interior of the moon is wet.”

Scientists were able to discern the molecular makeup of the moon’s rocky surface, identifying minerals and compounds, by measuring which wavelengths are absorbed and reflected as the moon orbits.

Because the moon’s surface heats up by midday, orbital spectrometers measure thermal energy as well as the surface’s spectral signature, complicating the analysis process.

“That thermally emitted radiation happens at the same wavelengths that we need to use to look for water,” Milliken said. “So in order to say with any confidence that water is present, we first need to account for and remove the thermally emitted component.”

Researchers used an analysis of previously collected lunar grains, as well as lunar heat maps, to properly calibrate — or correct — the spectrometer observations.

Their findings confirmed the presence of significant amounts of water in volcanic deposits on the surface of the moon.

“The distribution of these water-rich deposits is the key thing,” Milliken said. “They’re spread across the surface, which tells us that the water found in the Apollo samples isn’t a one-off. Lunar pyroclastics seem to be universally water-rich, which suggests the same may be true of the mantle.”

Most scientists believed the violent collision that carved lunar rock from Earth was too hot for hydrogen to survive. As a result, researchers assumed the moon’s mantle was dry.

The latest findings — published this week in the journal Nature Geoscience — suggest either hydrogen was able to withstand the violent impact and form water, or water and water-forming elements were delivered by comets and asteroids shortly afterwards.

Coral gardening is a boon to Caribbean reefs

Scared to extinction: Fear is powerful enough to wipe out a species, study shows