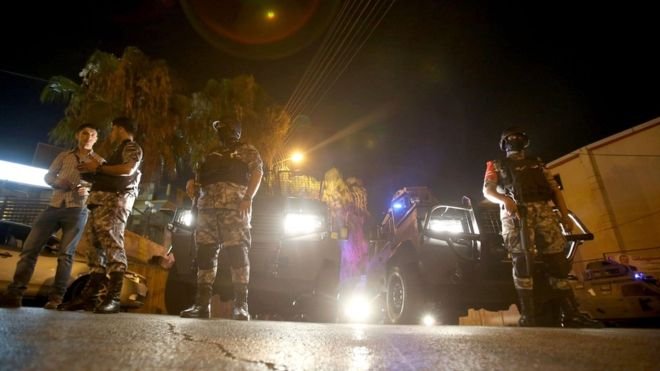 Israel and Jordan are involved in a diplomatic standoff after an Israeli guard reportedly shot dead a Jordanian attacker near the embassy in Amman.

Jordanian police want to question the guard and have sealed off the area, but Israel says he has diplomatic immunity.

A second Jordanian hit by the gunfire died in hospital. Israel says he was inadvertently shot.

It is one of the most serious incidents between the two countries since they signed a peace treaty in 1994.

Israel’s foreign ministry said one of the Jordanians stabbed the security officer from behind inside a residential building adjacent to the embassy where he had gone to install some furniture.

The suspected attacker was named in local media as Mohammed Zakaria al-Jawawdeh, a 17-year-old carpenter.

The second Jordanian, who later died, was the building’s landlord.

All three were taken to hospital and the guard is believed to have returned to the embassy compound following treatment.

Jordanian authorities are investigating and have sealed off the area around the heavily protected embassy in the Rabiyeh neighbourhood, an affluent part of Jordan’s capital.

Unconfirmed reports in Israeli media say Jordan is not allowing the guard to leave the country and that Israel has confined embassy staff to the compound.

Israel’s foreign ministry said that under the 1961 Vienna Convention, the security guard has immunity from investigation and detention.

Israeli Prime Minister Benjamin Netanyahu spoke to Israel’s ambassador to Jordan, Eynat Schlein, following the incident on Sunday night. Discussions are also under way between Israeli and Jordanian authorities to try to resolve the matter.

The incident comes at a time of heightened tension in the region over a Jerusalem holy site, where Jordan has an historical role as custodian.

On Friday, thousands of Jordanians protested in Amman against the installation by Israel of metal detectors outside the East Jerusalem site sacred to both Muslims and Jews.

Jordan, which occupied East Jerusalem from 1949 to 1967, funds the upkeep of the site, which is known to Muslims as Haram al-Sharif and Jews as the Temple Mount, and runs the Waqf, the religious trust which administers the compound.

Tensions between Israelis and Palestinians over the site have surged in recent days in response to the metal detectors, which were put in place following the killing nearby of two Israeli policemen.

Security cameras have now also been installed at a gateway leading to the site.

Attack at Israeli embassy in Jordan