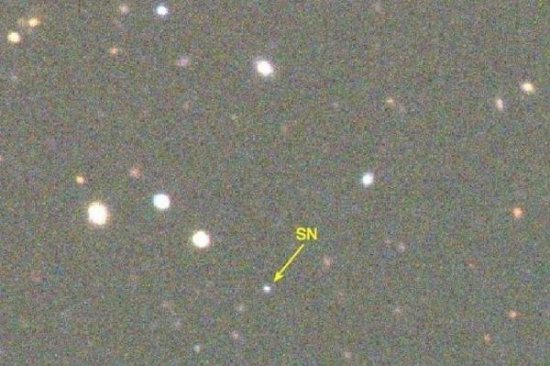 Researchers have identified a superluminous supernova located 10 billion light-years from Earth. It is one of the brightest and most distant star deaths ever recorded.

Because the intense radiation produced by the supernova has been traveling for 10 billion years, it offers astronomers a glimpse of the universe’s past — a snapshot of the cosmos as it was just 3.5 billion years after the Big Bang, a time period known as “cosmic high noon.”

During cosmic high noon, the universe’s young galaxies began churning out stars at a prodigious rate.

Superluminous supernovae, sometimes called hypernovae or SLSNs, are much rarer than other types of supernovae. They’re also 10 to 100 times brighter. Astronomers have struggled to determine what exactly makes the massive star death different than other stellar failures.

The latest discovery — detailed in the Monthly Notices of the Royal Astronomical Society — may offer clues.

“It’s important simply to know that very massive stars were exploding at that time,” Ryan Foley, an assistant professor of astronomy and astrophysics at the University of California, Santa Cruz, said in a news release. “What we really want to know is the relative rate of superluminous supernovae to normal supernovae, but we can’t yet make that comparison because normal supernovae are too faint to see at that distance. So we don’t know if this atypical supernova is telling us something special about that time 10 billion years ago.”

Most superluminous supernovae have been found in low-mass or dwarf galaxies, which boast low concentrations of metals. But the home of the newly discovered SLSN is a large, normal galaxy.

Previous research has shown stars with low levels of heavy metals retain a larger percentage of their original mass after they cease to generate stellar fusion. Thus, they’re bigger when they finally collapse and explode.

It’s possible the newly discovered supernova was produced by a star low in metal, despite the stars home in a massive galaxy.

“We are looking so far back in time, this galaxy would have had less time to create metals, so it may be that at these earlier times in the universe’s history, even high-mass galaxies had low enough metal content to create these extraordinary stellar explosions” Foley said. “At some point, the Milky Way also had these conditions and might have also produced a lot of these explosions.”

Scared to extinction: Fear is powerful enough to wipe out a species, study shows