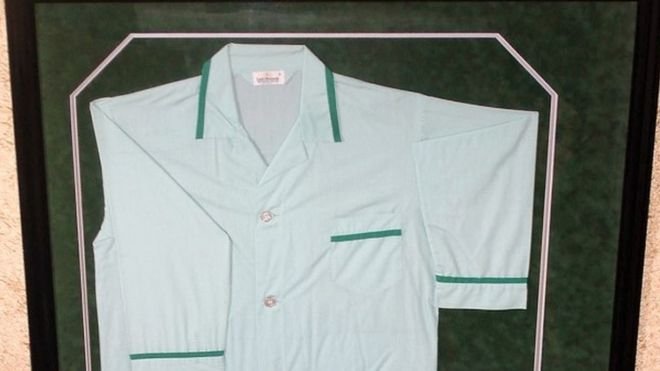 A pair of mint-green pyjamas worn by Elvis Presley has sold at auction for $10,400.

The Lord Shannon nightwear was worn by Elvis during a stay at the Baptist Memorial Hospital, Memphis, in 1977.

Auctioneer Andrew Aldridge said: “He spent a week there recovering from exhaustion and they were left at his father’s home.”

The auction house in Wiltshire was asked to hold the sale after auctioning Elvis’s shoes for £29,500 in 2015.

After Elvis died in August 1977, aged 42, the pyjamas went on display at the world famous Elvis-A-Rama museum for many years.

His first music agency contract was also auctioned at Henry Aldridge and Son in Devizes and sold for £37,000.

It was signed on 31 January 1956, the day after the singer recorded Blue Suede Shoes.

Mr Aldridge said: “There was significant interest in the auction from buyers all over the world especially from the US and UK both online and bidders on the phone.

“The prices achieved reflect the continuing interest in the King of Rock and Roll.”

A copy of The Omen novel which contained one of his last-ever autographs was withdrawn from the auction by its owner.

“He decided he couldn’t bear to part with it,” Mr Aldridge said.

There’s no such thing as the Bermuda Triangle