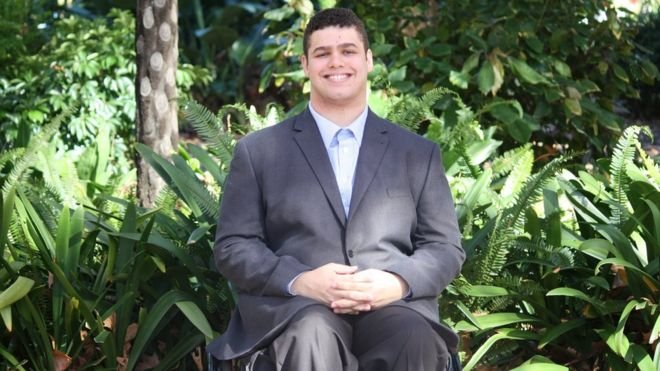 A university student is likely to become Australia’s youngest-ever senator after the resignation of a politician he calls his “mentor”.

UK-born Jordon Steele-John, 22, has agreed to replace Scott Ludlam in the Senate for the left-wing Greens party.

Mr Steele-John, who has cerebral palsy, says he will be a disability advocate.

He is tipped to replace Mr Ludlam because he was next in line on last year’s election ballot paper, and he has the backing of his party.

Who is Jordon Steele-John?

The politics and history student came to Australia as a young child.

A wheelchair user, Mr Steele-John says he is ready to be a “strong voice” for people with disabilities.

“The future belongs to young people. We need to be represented in our parliament,” Mr Steele-John said in a statement.

“There is a very large group of people who will now have a voice that truly understands and represents their interests.”

He says he has worked hard to challenge stigmas surrounding disability.

“I’ve learned that to be a young person with a disability in contemporary Australia is to occupy the intersection of some of our society’s most ingrained myths and most damaging pre-conceived ideas,” he said.

“At every opportunity I’ve worked hard to bust these myths.”

Mr Steele-John said he was shocked and saddened by the resignation of Mr Ludlam, who he described as “an incredible mentor and friend”.

“We are only at the beginning of this process and there are still a lot of steps to go, but I am ready to do this job,” he said.

Under Australia’s constitution, a person cannot run for federal office if they hold dual or plural citizenship.

Mr Ludlam resigned on Friday after learning recently that he was also a citizen of New Zealand.

On Tuesday, fellow Greens Senator Larissa Waters, who was born in Canada, also quit for having dual citizenship.

Although Mr Steele-John was born in the UK, he renounced his dual citizenship in 2013 when he first stood for office.

Under official rules, Mr Ludlam’s replacement will be chosen by counting back last year’s votes for the Senate in Western Australia.

If, as expected, Mr Steele-John receives the most votes, his party has indicated it will support him.

However, his candidacy will also need to be confirmed through official party procedures, and legal processes relating to Mr Ludlam’s departure.

“Jordon has been an active Greens member for many years, and is well known and respected outside the party for his work in the youth and disability sectors,” party co-convenors Sarah Nielsen-Harvey and Grahame Bowland said in a joint statement.

Ms Waters’ replacement will be found through a similar process in the state of Queensland.

Cardinal Pell will plead not guilty, his lawyer confirms