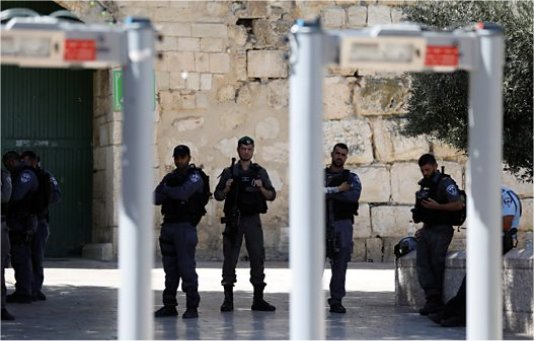 Israel has tightened security around Jerusalem’s Old City amid fears of violence over the installation of metal detectors at a sacred site.

Israel has barred men under the age of 50 from the area after Palestinian leaders called for worshippers to flock there for Friday prayers.

There have been nightly clashes since the devices were installed last weekend at entrances to the holy compound.

It follows the killing nearby of two Israeli police by Israeli Arab gunmen.

Palestinian and Islamic leaders have fiercely objected to the installation of the metal detectors, saying it is a violation of the status quo.

Israel says it is a necessary security measure after the weapons used to kill the policemen were smuggled into the holy site, known to Muslims as Haram al-Sharif (Noble Sanctuary) and Jews as the Temple Mount.

The area, in East Jerusalem, has been under Israeli occupation since the 1967 Middle East war.

Israel has repeatedly pledged to maintain the status quo – a delicate set of arrangements in place at the site for the past 50 years. Any extra measures taken there are often regarded by Palestinians, who claim East Jerusalem as the capital of a sought-after state, as a violation of these arrangements.

An Israeli police statement on Friday said: “Entry to the Old City and Temple Mount will be limited to men aged 50 and over. Women of all ages will be permitted.”

The age restriction has previously been used to try to prevent rioting at the holy site.

The Palestinian militant group, Hamas, which runs Gaza, called for a “day of rage” on Friday, urging Palestinians to gather at the compound, site of the al-Aqsa mosque.

Thousands of police have been deployed and buses transporting Muslim worshippers were stopped from entering Jerusalem on Friday morning.

After last Friday’s attack, the holy site was closed for Muslim prayers for the first time in decades as police searched the area for weapons.

Since the introduction of metal detectors, Palestinians have refused to enter the site, holding prayers outside.