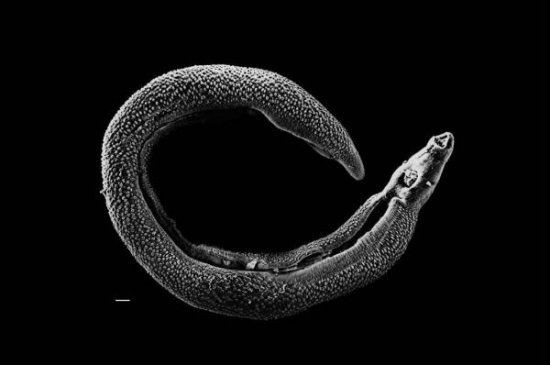 Trematodes, commonly known as flukes, infect mollusks, usually snails, and make their way into the insides of vertebrates who consume infected mollusks. They can cause disease in humans, and blood fluke infections kill an estimated 200,000 people every year.

The bodies of the parasitic flatworms don’t fossilize, but their presence can be found on the surface of fossil clam shells. Clams form tiny crater-like deposits on their shells at the site of the attempted trematode infestation. The defense mechanism serves as a barometer of the prevalence of the parasite.

Recently, researchers analyzed dozens of clam fossils excavated in sediment cores drilled from floodplains of the Po River in Italy. Researchers compared the frequency of attempted trematode infestations with historic records of sea level and salinity.

Scientists found a strong correlation between rising seas and an increase in parasitic infections.

“We found that pulses in sea-level rise occurred on the scale of hundreds of years, and that correlated to rises in parasitic trematodes in the core samples,” John Huntley, an assistant professor of geological sciences at the University of Missouri, said in a news release.

Huntley and his colleagues suggest the prevalence of harmful parasites could rise as global warming accelerates sea level rise.

“What concerns me is that these rises are going to continue to happen and perhaps at accelerated rates. This poses grave concerns for public health and ecosystem services,” Huntley said. “These processes could increase parasitism in not only estuarine systems but also in freshwater settings.”

Huntley and his research partners published their latest results this week in the journal Scientific Reports.