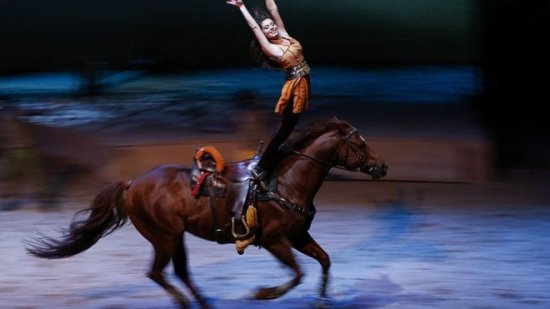 According to Radio-Canada, officials entered a hotel room where members of the travelling equestrian show Cavalia were staying on 14 July.

The public broadcaster said officials made a number of arrests and two Canadians remain in prison.

A spokesperson for Cavalia said they were trying to arrange for two employees to return to Canada.

“This is a private matter. All I can tell you is that recently, Chinese representatives have contacted us to ask if we were willing to buy airplane tickets to quickly repatriate them in Canada, and of course we are,” spokesperson Eric Paquette told the BBC.

“At this point, our hope is that the repatriation process unfolds rapidly.”

Global Affairs Canada said it is providing consular services to two citizens who were detained in Beijing.

“Consular services are being provided to two Canadians who were detained in Beijing, China, as well as to their families,” said a spokesperson for the department.

“Consular officials are in contact with local authorities to gather additional information.

“Due to privacy considerations, we are unable to provide further information on this matter.”

Cavalia was created in 2003 by one of the co-founders of Cirque de Soleil, and has been described as “equestrian ballet”. It has been performing in Beijing since April and even planned to build a permanent theatre in Hangzhou.

China’s drug laws are very strict, and trafficking large amounts of drugs can lead to a death sentence.

Even minor drug crimes can lead to an arrest or deportation.

Canadian diplomat struck by headaches and hearing loss in Cuba