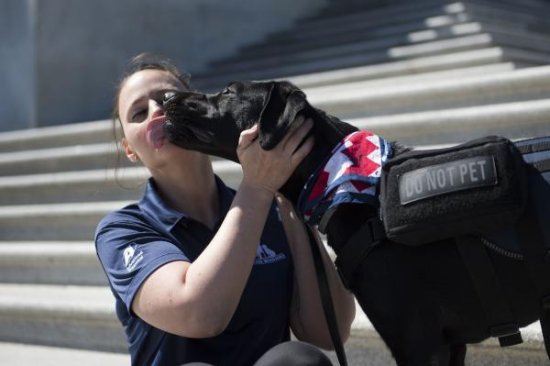 Scientists found unique genetic insertions in chromosome 6 in dogs were linked with a propensity to seek out human attention and direction. The insertions, called transposons, were found among a genomic region linked with Williams-Beuren syndrome.

“It was the remarkable similarity between the behavioral presentation of Williams-Beuren syndrome and the friendliness of domesticated dogs that suggested to us that there may be similarities in the genetic architecture of the two phenotypes,” Bridgett vonHoldt, an assistant professor of ecology and evolutionary biology at Princeton University, said in a news release.

VonHoldt had previously identified the canine analog to the portion of the human genome known as the Williams-Beuren syndrome critical region, or WBSCR.

As part of the latest study, researchers compared the interactions of various dog breeds and human-socialized wolves with humans. Both wolves and dogs participated in a variety of problem-solving tests with food rewards. Dogs were more likely to exhibit human-directed behavior and seek out the assistance of humans during the tests.

Researchers found the differences in behavior could explained by transposons among the dogs’ WBSCR genes.

“We haven’t found a ‘social gene,’ but rather an important [genetic] component that shapes animal personality and assisted the process of domesticating a wild wolf into a tame dog,” vonHoldt said.

The latest findings — detailed this week in the journal Science Advances — suggest many sets of genes are linked with similar traits across variety of species.

The findings also confirm that dogs were likely selected for their general sociability, not for any specific cognitive abilities.

“If early humans came into contact with a wolf that had a personality of being interested in them, and only lived with and bred those ‘primitive dogs,’ they would have exaggerated the trait of being social,” vonHoldt said.

Related Topics:GregariousnessScienceWilliams-Beuren syndrome
Up Next