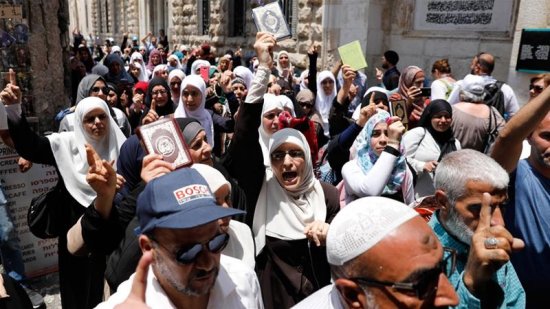 The Palestinian group Hamas has warned Israel against crossing a “red line” at the al-Aqsa Mosque compound, as residents of the Gaza Strip demonstrate for a second day in solidarity with Muslim worshippers protesting against the new security measures at the holy site.

“To the Zionist enemy I say openly and clearly: al-Aqsa Mosque and Jerusalem are red lines. Truly they are red lines,” Ismail Haniyeh, leader of Hamas, said on Thursday.

“To the enemy I say, your policy of closure and imposition of collective punishments against the residents of Jerusalem and our places of sanctity will not be tolerated. ”

Marches have been organised throughout the day by Hamas, the Islamic Jihad and other groups, demanding that Israeli remove the metal detectors installed at the entrance of al-Aqsa.

The groups are calling them “Israeli aggression” and are warning of consquences if they are not rolled back.

Thursday’s protests in Gaza and outside al-Aqsa follow days of clashes between Israeli forces and Palestinians across the occupied West Bank and East Jerusalem over the new security measures.

Metal detectors and turnstiles were installed at the holy site after a deadly shoot-out there on Friday.

In that incident, two Israeli security officers were killed in an alleged attack by three Palestinians, who were killed by Israeli police following the violence.

Ahead of the Friday prayers, the Israeli government is considering what to do next with the new security measures.

On Wednesday, Israeli Prime Minister Benjamin Netanyahu spoke by phone from Hungary with Israel’s security chiefs to hear their assessments and recommendations, according to a statement by his office.

Israel’s internal security service, Shin Bet, has recommended that the metal detectors be removed, but Jerusalem police have said that the barriers should stay in place.

“They see this as an escalation of Israeli sovereignty over al-Aqsa compound,” Khan said. “Palestinians are asking what happens next.”

Netanyahu said on Friday that he did not want to alter the status quo, which gives Muslims religious control over the compound and Jews the right to visit, but not pray there.

But Palestinians fear Israel is trying to retake the site by stealth.

“This by no means is just about physical detectors. It is about who controls the al-Aqsa Mosque compound,” our correspondent said.

The site houses al-Aqsa Mosque and the Dome of the Rock shrine, Islam’s third holiest site after Mecca and Medina, as well as the ruins of the Biblical Jewish Temple.

Muslims know the site as al-Haram al-Sharif, or the Noble Sanctuary, while Jews refer to the place of worship as Temple Mount.

Palestinian President Mahmoud Abbas cut short his trip to China on Wednesday to return to Palestine to deal with the mounting tensions.

His office said he had been touch with Arab and international leaders to try to “prevent a deterioration of the situation”.

Meanwhile, on Wednesday, Jerusalem’s top Muslim leader called on all of the city’s mosques to close on Friday in protest against the new security measures.

Grand Mufti Muhammad Hussein said Palestinian Muslims should instead gather outside the gates of al-Aqsa Mosque for the weekly Friday prayers.

Questions about control of the site frequently lead to outbursts of fighting.

After last Friday’s alleged attack, Israel closed off the area, preventing Friday prayers at the al-Aqsa Mosque for the first time in decades.