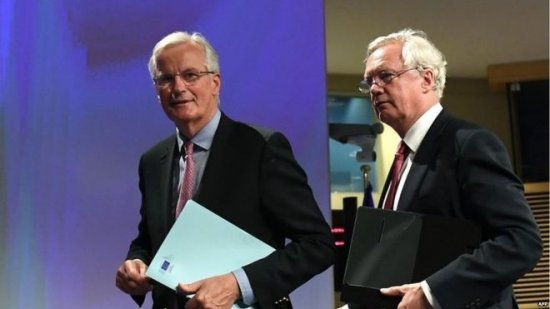 Brexit negotiators are to outline what progress has been made so far as the latest round of talks come to an end.

The UK’s Brexit Secretary David Davis and the EU’s Michel Barnier will meet to assess the past four days of talks.

Groups of British and EU officials have been discussing citizens’ rights, the Irish border and separation issues, including UK financial liabilities.

The EU has said talks won’t move onto the subject of future trading until it judges there’s been adequate progress.

The two sides are meeting for four days each month, with this week’s talks aimed at scoping out points of difference and common ground in those areas that have been identified as requiring urgent attention.

After the Brexit process was effectively put on hold during the UK general election, the process has moved up a gear this week, with 98 British officials engaged in different streams of work at one stage.

The UK and EU have made separate offers on residency rights, each side saying they want an early agreement to give certainty to the three million EU nationals in the UK and the 1.2 million British expats on the continent.

But both sides are adamant that any deal must be reciprocal.

It has been reported that final agreement on the size of any so-called “divorce bill” that the EU believes the UK should pay is unlikely to be sealed until late 2018.

The UK has said it will honour its membership obligations and pay what it is lawfully due but has rejected talk of paying “extortionate” sums of up to 100bn euros (£84bn).

Despite speculation about the possible sums involved, it has been reported that no official figures have yet been put on the table.

Progress over the summer months will be closely watched as a sign of whether the two sides are on track to make sufficient strides by October’s EU summit to open parallel talks on future trading arrangements.

Later on Thursday Theresa May will get round a table with business leaders in Downing Street to try and allay their concerns about the impact of the UK leaving the single market and customs union.

The first meeting of a new Brexit business steering group comes amid fresh warnings about the cost to British companies of the UK leaving without a deal of any kind, which would see the UK default to World Trade Organisation global trading rules.

A report from academics and experts at The UK in a Changing Europe says failure to reach agreement on the terms of the UK’s exit and its future trade relationship with the EU could cause “widespread” damage to the aviation, nuclear and pharmaceutical sectors among others.

But, in a more upbeat message about the UK’s future outside the EU, International Trade Secretary Liam Fox will tell officials at the World Trade Organisation on Thursday that Brexit is an opportunity for the UK to “set its sights wider and embrace the realities of globalisation”.

In a speech in Geneva, Mr Fox will highlight the potential benefit to the UK of further liberalisation in the global market for services, particularly in e-commerce and the digital industries.

However, the cabinet minister – who is in charge of laying the ground for post-Brexit trade deals with countries such as Australia, New Zealand and the UK – will warn of the rise in protectionist sentiment and the need to tackle impediments to free trade – particularly the growth in non-tariff barriers since 2010.

“Those who have benefited most from an open, liberal trading environment have a duty to ensure that others are able to take advantage of the same benefits in the future.”

Mr Fox told BBC Radio 4’s Today programme that, outside the EU, the UK could “replicate” the arrangements that it has with the WTO as an EU member and had had a “very positive response” from the organisation.

He denied he was planning for a situation in which the UK leaves the EU with no deal but added: “We can of course survive with no deal.”

He said that he did not “have a problem” with a transitional Brexit deal, which he described as an “implementation phase” but insisted: “You can not leave the European Union and be in the single market and the customs union.”