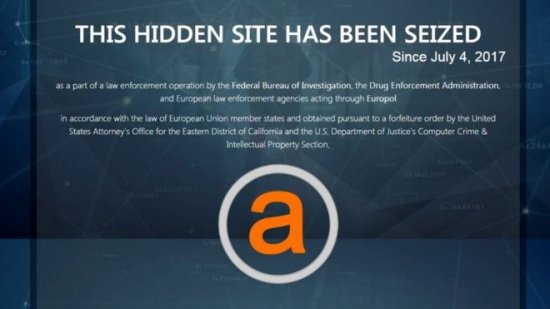 Two of the largest dark web marketplaces have been shut down following a “landmark” international law enforcement investigation.

The AlphaBay and Hansa sites had been associated with the trade in illicit items such as drugs, weapons, malware and stolen data.

According to Europol, there were more than 250,000 listings for illegal drugs and toxic chemicals on AlphaBay.

Hansa was seized and covertly monitored for a month before being deactivated.

The agency said it believed the bust would lead to hundreds of new investigations in Europe.

“The capability of drug traffickers and other serious criminals around the world has taken a serious hit today,” said Europol’s executive director Rob Wainwright.

It was a “landmark” operation, according to US Federal Bureau of Investigation (FBI) director Andrew McCabe.

AlphaBay has been offline since early July, fuelling suspicions among users that a law enforcement crackdown had taken place.

“We know of several Americans who were killed by drugs on AlphaBay,” said US Attorney General Jeff Sessions.

“One victim was just 18 years old when in February she overdosed on a powerful synthetic opioid which she had bought on AlphaBay.”

He also said a 13-year-old boy died after overdosing on a synthetic opioid bought by a high school classmate via the site.

Mr Sessions cautioned criminals from thinking that they could evade prosecution by using the dark web: “You cannot hide,” he said, “We will find you.”

The US Department of Justice (DoJ) said that illegal drugs listed for sale on AlphaBay included heroin and fentanyl.

Investigations were led by the FBI, the US Drug Enforcement Agency (DEA) and the Dutch National Police.

Police in other countries, including the UK, France and Lithuania, also contributed.

The Dutch National Police took over the Hansa marketplace on 20 June after two men in Germany were arrested and servers in Germany, The Netherlands and Lithuania were seized.

This allowed for “the covert monitoring of criminal activities on the platform” until it was eventually shut down a month later.

Ever since AlphaBay went offline earlier in July, users of the site had discussed potential alternative dark web marketplaces on online forums.

Hansa was frequently mentioned, meaning that the authorities were likely able to uncover new criminal activity on Hansa as users migrated to it from AlphaBay.

“We recorded an eight times increase in the number of human users on Hansa immediately following the takedown of AlphaBay,” said Mr Wainwright.

An alleged administrator of AlphaBay, 26-year-old Canadian Alexandre Cazes, was arrested in Thailand on 5 July following a joint operation between US, Canadian and Thai authorities.

But Cazes was later found dead in a Bangkok jail cell.

The DoJ said that he apparently took his own life.

A previous dark web marketplace, Silk Road, was shut down by the FBI in 2013 and a successor – Silk Road 2.0 – was deactivated the following year.

However, in its press release today the DoJ said that AlphaBay had more than 350,000 listings for illicit items of various kinds – Silk Road only had 14,000 when it was seized in 2013.

Is WhatsApp being censored in China?