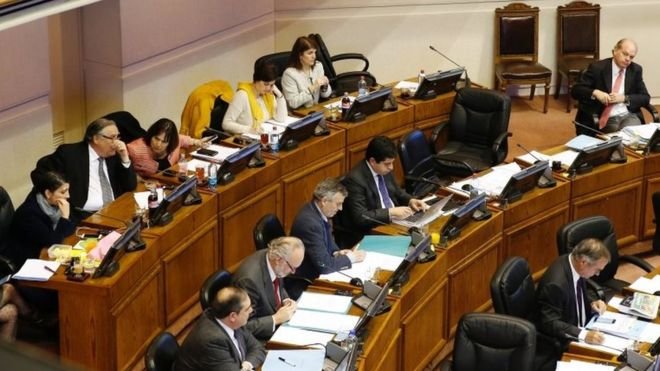 Senators in Chile have voted in favour of a proposal which would end the country’s total ban on abortions.

The measure would allow abortion in cases of rape, if the mother’s life was at risk or if the foetus would not survive the pregnancy.

Currently, women can be prosecuted if they have an abortion.

The bill, which has the backing of President Michelle Bachelet, will now go back to the Chamber of Deputies for approval.

The proposal was first introduced two and a half years ago and has faced by stiff opposition from the Catholic Church and socially conservative groups.

Senators voted separately on each of the three cases in which women would be allowed to have an abortion:

The voting went late into the night and was further delayed when police had to remove abortion opponents who had interrupted proceedings with their chanting and shouts.

But on Twitter, a hashtag backing the bill was trending.

Supporters of the bill hope the Chamber of Deputies will now swiftly approve the document without further changes so it can be sent to President Bachelet for signing.

Changing Chile’s strict abortion laws has been one of the president’s main goals.

“In this country until now this is criminalised – if you interrupt your pregnancy, you will go to jail. And I believe this is not fair.”

But opposition to the move has been considerable and the debate surrounding it at times bitter.

Abortion in limited cases was legal in Chile until 1989, when it was completely banned under the rule of Gen Augusto Pinochet.