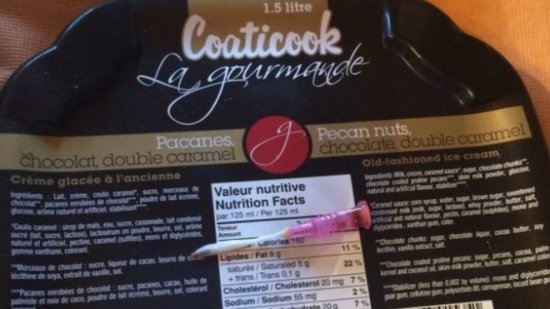 A Canadian family who found an intravenous catheter in a tub of ice cream will need to undergo medical tests for the next six months.

Four people had already been eating the caramel pecan ice cream when one bit into a piece of the medical device.

The ice cream manufacturer says it has requested a full investigation by Canada’s food inspection agency.

Quebec health authorities told the family they must undergo blood tests for Hepatitis A, B, and C and for HIV.

They will have to be tested for the next six months.

The Canadian Food Inspection Agency confirmed it is investigation the incident.

The family was celebrating the birth of a baby, and it was the new grandfather who bit down on the syringe. At first, he thought it was just a pecan.

“He put it in his mouth and found the tip of syringe,” family member Carole-Anne Christofferson told Radio-Canada.

“He is the worst off, the most affected. He’s not even able to speak about it.”

The ice cream manufacturer, Laiterie de Coaticook, based in Trois-Rivières, Quebec, says the container tells them the exact date the ice cream was made and they are looking through surveillance footage.

“We have so many internal controls here and in food production in general that having something like that show up in a food item, it is not normal,” a Coaticook spokesperson told the CBC.