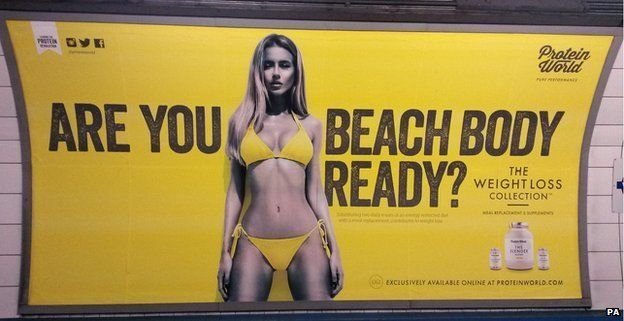 There should be stronger regulation of advertisements which show men failing at simple household tasks and women left to clean up, says the body that oversees UK advertising.

The Advertising Standards Authority has reviewed its approach to ads that feature stereotypical gender roles.

It concluded that ads that mock people for not conforming to gender types or reinforce gender roles had “costs for individuals, the economy and society”.

As a result new rules will be drawn up.

The Advertising Standards Authority (ASA) said it had decided to conduct a review following the public’s reaction to the “beach body ready” advertising campaign in 2015 which prompted a wave of complaints for showing a bikini clad model in an advertisement for a slimming product, which critics said was socially irresponsible.

In the past the ASA has banned ads on grounds of objectification, inappropriate sexualisation, and for suggesting it is desirable for young women to be unhealthily thin.

But in several instances the regulator had received complaints about ads that featured sexist stereotypes or mocked people who didn’t follow traditional roles, which it had not investigated or ruled against, because they were not in breach of the current guidelines.

One example was an advert for Aptamil baby milk formula which showed girls growing up to be ballerinas and boys becoming engineers. Complaints had also been made about adverts for GAP which showed a boy becoming an academic, and a girl becoming a “social butterfly”.

An advertisement for KFC featured one man teasing another, who said he suffered from anxiety, over his lack of masculinity.

The review suggested that new standards should consider whether the stereotypes shown would “reinforce assumptions that adversely limit how people see themselves and how others see them.”

“Portrayals which reinforce outdated and stereotypical views on gender roles in society can play their part in driving unfair outcomes for people,” said chief executive of the ASA, Guy Parker.

“While advertising is only one of many factors that contribute to unequal gender outcomes, tougher advertising standards can play an important role in tackling inequalities and improving outcomes for individuals, the economy and society as a whole.”

Not all stereotypes would be barred, however.

The ASA suggested showing a woman cleaning or a man doing DIY tasks was acceptable.

However it would be unacceptable if a family was shown making a mess and the woman was left with the sole responsibility to clean it up, or a man was shown “trying and failing to undertake simple parental or household tasks”.

The ASA also said ads suggesting specific activities were suitable only for boys or girls were problematic.