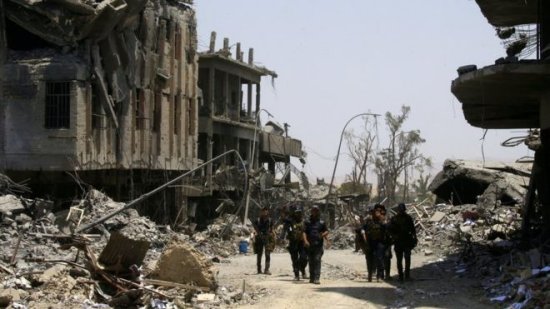 German prosecutors are investigating whether a 16-year-old German girl is among a group of suspected members of so-called Islamic State held in Mosul.

She was reportedly among a group of 20 foreigners found by Iraqi troops in a tunnel under the Old City on Thursday.

Officials are trying to confirm if she is the same girl who went missing from the German town of Pulsnitz last year.

Iraq’s government has declared victory over IS in Mosul, although clashes continue in parts of the Old City.

The almost nine-month battle left large areas in ruins, killed thousands of civilians and displaced more than 920,000 others.

Photographs of the girl being detained by Iraqi troops were published by local media over the weekend.

The German DPA news agency reported that the group of foreigners were in possession of weapons and explosives belts when they were found. They included five Germans, three Russians, three Turks and two Canadians, it added.

At first, the girl was thought to be Russian, according to the Kurdish BasNews website. A Yazidi family then thought she might be their missing daughter, but that was subsequently ruled out.

On Monday night, the Bild newspaper said the girl was believed to be a 16 year old who had gone missing from her home in the German state of Saxony last summer.

Shortly before travelling to Syria via Turkey, the girl had reportedly converted to Islam and been in contact with IS members online.

She had been under investigation for allegedly preparing for a possible act of terrorism, but prosecutors suspended the probe following her disappearance.

On Tuesday, the chief prosecutor in the German state of Saxony, Lorenz Haase, said officials were reviewing new evidence and that the investigation would resume if the girl “reappears and is conclusively identified”.

An Iraqi official told Reuters news agency he believed the girl was of Slavic origin, possibly Russian. She had been taken to a hospital for treatment for burns after being detained, and would probably be handed over to her country’s diplomatic mission and not kept in Iraq, he added.

The German BfV domestic intelligence agency estimates that 930 people, about 20% of them women, have left the country to join IS in Iraq and Syria.

US imposes fresh sanctions on Iran over missile tests

Jordan soldier who killed US trainers jailed for life