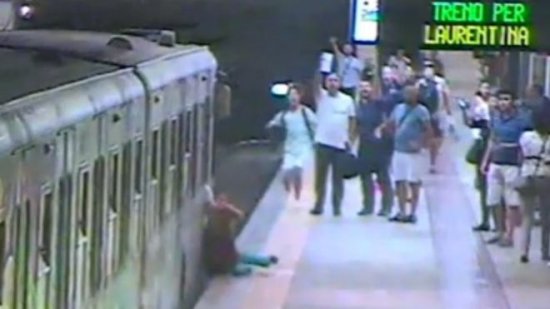 Footage of a woman being dragged along a platform by a train, after her bag got trapped in the door, has raised safety questions about Rome’s metro.

Natalya Garkovich, 43, was left in intensive care after sensors failed to register the strap and emergency brakes did not stop the train’s advance.

The incident is being investigated, but Mr Tonelli says he followed protocol.

“I know that I was wrong and I am devastated by what happened to that woman,” Mr Tonelli told Italian daily Corriere della Sera [in Italian]. “But in the video it can also be seen that I looked twice in the mirror, I was not reckless.”

The accident took place on Wednesday 12 July, but the footage did not emerge until the weekend.

Ms Garkovich, who local media report is a Belarusian national, was initially in intensive care, but her condition has since improved. Reports suggest she has broken bones from the accident.

The CCTV footage shows Ms Garkovich boarding the train at Termini station, before changing her mind at the last minute.

As she backs out of the train, her bag appears to become stuck – and despite the efforts of people on the platform, she cannot be freed.

Local news outlets report that passengers on board the train pulled a number of emergency levers, but were unsuccessful. It is believed Ms Garkovich was not pulled into the tunnel.

The first Mr Tonelli knew of the accident was when he pulled into the next station, according to reports.

The CCTV footage shows that Mr Tonelli was eating while the train was in the platform.

But Carlo Rienzi, president of consumer rights group Codacons, said the failure of both the door and emergency levers meant Mr Tonelli could not be fully to blame.

“The emergency systems on board must function properly,” he said in a statement, “Therefore we consider it outrageous and offensive to say the train driver is entirely responsible, when you should thoroughly investigate the Rome subway security systems and their proper operation.”

“If the trains were equipped with cameras in the cockpit it might have been different,” he told news agency Ansa (in Italian).