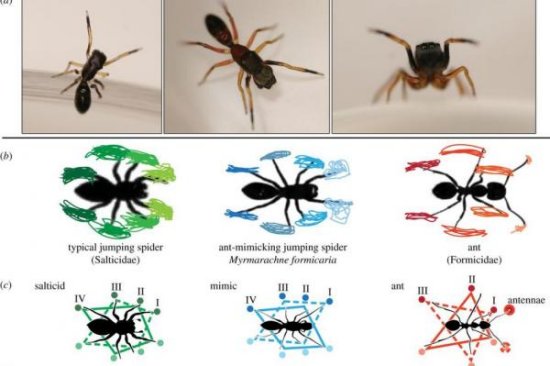 Most humans have a much greater fear of spiders than they do of ants. But for insect predators, ants are a much more formidable opponent. They sting, bite and are full of acid.

Some spiders are seemingly aware of this fear factor discrepancy and use it to their advantage. To avoid predation, jumping spiders mimic the walk of ants.

Most examples of mimicry involve shape and color. Moths, for example, adopt the appearance of butterflies. Jumping spiders don’t sport ant costumes, but they do copy their walk.

Researchers at Cornell University used high-speed cameras to film the walk of both ants and jumping spiders, noting strong similarities in their locomotion. The footage showed spiders frequently pause and lift two of their legs to imitate ant antennae. They also follow winding routes, recalling the paths of ants following a trail of pheromones.

For predators, who can’t process visual inputs as quickly and clearly as a high-speed camera, these acting tricks render the jumping spider as just another ant.

Researchers detailed their discovery this week in the journal in the Proceedings of the Royal Society B.

The findings “highlight the importance of dynamic behaviors and observer perception in mimicry,” researchers wrote.