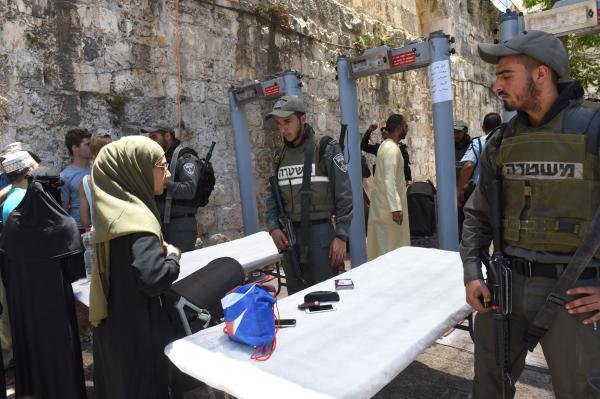 About 600 Muslims had entered the temple from when it opened at 1 p.m. until 5 p.m. — far fewer than the thousands that usually visit the mosque. Others stayed outside in protest of the new security arrangement.

On Friday, Israeli police said three Arab-Israeli suspects, whom officials identified as terrorists, opened fire at a group of police officers, killing two officers. The victims were members of the Druze faith, which incorporates elements of Islam, Hinduism and classical Greek philosophy.

The guns used in the attack had apparently been stashed earlier on the Temple Mount.

The temple was closed for the first time in nearly 50 years on a Friday, Islam’s holy day.

Metal detectors previously were set up at the temple but were removed in 2000. Those entering the Western Wall Plaza and Western Wall, beneath the Temple Mount compound, for many years have been required to go through metal detectors.

Waqf officials, who oversee the religious management of the temple, instigated a protest outside the entrance. Dozens of worshipers instead conducted their afternoon prayers next to the gate.

“This is a severe violation of the status quo,” said Shikh Omar al-Qiswani, the director of the al-Aksa Mosque, said in a statement.

The Waqf officials were not required to pass through the detectors.

Mahmoud al-Aloul, deputy head of Palestinian Authority President Mahmoud Abbas’s Fatah faction, told Palestinian media that the detectors were “illegitimate.” He said security would only be ensured by preventing the entry of “settlers” and removing “Israeli soldiers” — Border Police officers stationed at the site — from the compound.