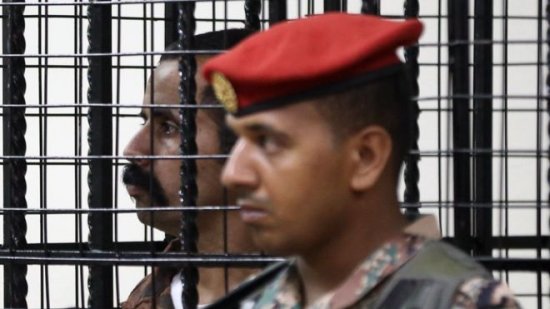 A Jordanian soldier has been sentenced to life in prison with hard labour for killing three US military trainers last year.

Marik al-Tuwayha, who pleaded not guilty to premeditated murder, attacked the men as their vehicles approached al-Jafr airbase in November.

One was killed at the base and two others died later in hospital.

Jordanian authorities initially claimed the US nationals had been killed when their vehicle failed to stop.

Tuwayha – who is not thought to have links to any militant groups – told the military court in the capital Amman he had opened fire after hearing gun shots.

But the US embassy said the trial had confirmed Staff Sgt Matthew Lewellen, Staff Sgt Kevin McEnroe and Staff Sgt James Moriarty “had been following procedure” when they were killed, according to the Associated Press news agency.

The US soldiers’ family members were in court to hear the verdict on Monday.

Staff Sgt Moriarty’s family had already expressed dismay at the prospect of a life sentence for Tuwayha, which is likely to be reduced to 20 years with good behaviour.

His father Jim described the sentence as “only the first step” in a letter to the Jordanian embassy on Monday, the AP reported.

Jordan is a member of the US-led coalition fighting the Islamic State group (IS) in Syria and Iraq, and US forces have trained a small group of Syrian rebels in Jordan, as well as Iraqi and Palestinian security forces.

This is not the first time a US trainer has been killed in Jordan.

In November 2015, a Jordanian police captain opened fire at a police training centre near the capital Amman, killing two Americans, a South African and two Jordanians.

The Jordanian government said the police captain had been a troubled individual, but security sources said he was an IS supporter.