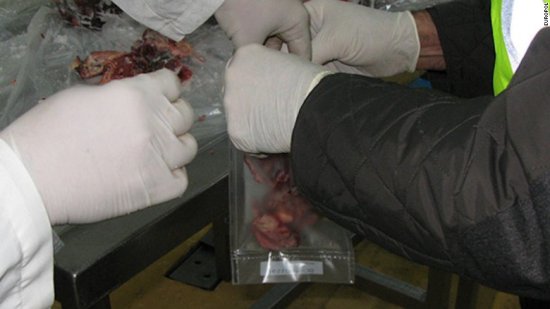 Spanish police have arrested and charged 65 individuals over a continent-wide ring that traded in horsemeat from animals “in bad shape, too old or simply labelled as ‘not suitable for consumption,'”according to a statement released by Europol.

Spain’s Guardia Civil, in coordination with Europol, the European police agency, charged the individuals with crimes including animal abuse, document forgery, perverting the course of justice, crimes against public health, money laundering and being part of a criminal organization, the press release says.

The investigation is related to 2013’s horsemeat scandal, which came to light after the Food Safety Authority of Ireland found that 10 out of 27 hamburger products it analyzed in a study contained horse DNA.

In one sample from Tesco — Britain’s largest grocery chain — the horsemeat accounted for about 29% of the burger.

A French supplier, Comigel, which supplies products to customers in 16 countries, was at the time implicated in the scandal. Some frozen products labeled as beef contained as much as 60% horsemeat.

The investigation in the wake of the scandal let to “the identification of a Dutch citizen known in the horsemeat world,” Europol says.

The suspect was later identified as the ringleader of an operation investigated in 2016 in which horses unfit for human consumption were being killed in two abattoirs in northern Spain and then sent to Belgium after their paperwork and microchips were altered.

After analyzing samples of the meat found in the Spanish slaughterhouses, investigators concluded that the meat was mostly sold abroad.

The Dutch suspect oversaw operations from Alicante, Spain, and had a network of “his most trusted men in charge in every country affected by the scam.”

The leader of the criminal group was arrested in Belgium, and police actions were carried out across the continent, including in France, Portugal, Italy, Romania, Switzerland and the UK.

Related Topics:ComigelEuropeEuropolSpain's Guardia Civil
Up Next

Woman on Rome metro dragged along platform by train

Netanyahu in Paris to commemorate Vel d’Hiv deportation of Jews