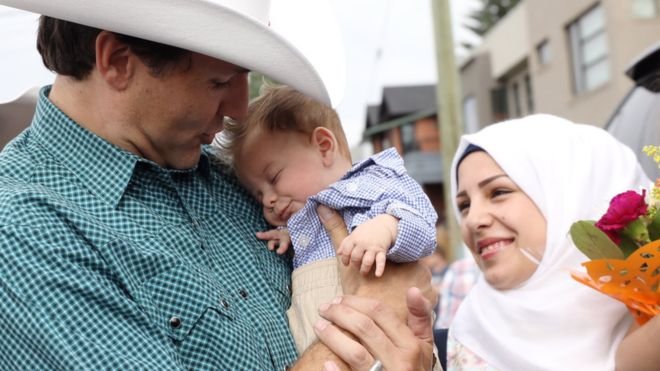 Canadian PM Justin Trudeau has met baby Justin Trudeau – the son of Syrian refugees named after the politician as a thank you to their adopted country.

The two-month-old boy, whose full name is Justin Trudeau Adam Bilan, was snoozing happily as the prime minister briefly held him at a Calgary Stampede breakfast on Saturday.

The boy was born in May in Calgary – several months after his parents and their two children fled Syria’s war.

They hail from the capital Damascus.

When they landed in Montreal in February last year, Mr Trudeau was not there to greet them at the airport, as he did with other Syrian refugees.

But the couple, Muhammad and Afraa Bilan, felt they had to give their thanks to him in some way – so have named their newborn son after him.

Between November 2015, when Mr Trudeau became prime minister, and January this year, more than 40,000 Syrian refugees have been resettled in Canada. About 1,000 of them moved to Calgary.

In late January, after US President Donald Trump’s ban on immigration from seven Muslim-majority countries, Mr Trudeau took to social media to confirm his government’s commitment to helping “those fleeing persecution, terror & war”.

In Ontario in February, another Syrian couple named their newborn Justin in tribute to the prime minister.