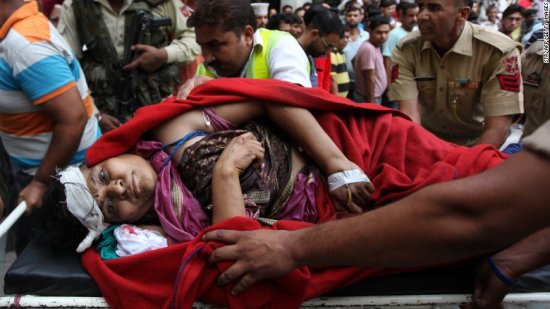 At least 16 Hindu pilgrims were killed Sunday when their bus veered off a national highway and plunged into a gorge in Indian-administered Kashmir, a local official said.

Another 29 people were injured when the bus crashed off the mountainous Jammu-Srinagar National Highway, the Indian Home Ministry said.

It was not immediately clear what caused the bus to fall into a gorge near Banihal, a town about 80 kilometers (50 miles) southeast of Srinagar.

“A rescue operation was launched immediately, and the seriously injured pilgrims are being airlifted to hospital in Jammu,” said Mandeep Bhandari, commissioner of the division of Jammu.

The pilgrims were headed to the sacred Amarnath cave shrine. Many Hindu pilgrims make the journey to the shrine in July and August.

Modi himself tweeted his condolences to the families of the deceased “Amarnath Yatris,” or Amarnath shrine pilgrims.

The bus crash came less than a week after eight Hindu pilgrims were killed while returning from the cave shrine on the same highway. Their bus was caught in crossfire between militants and Indian security forces.

Pakistan launches offensive against IS near Afghan border