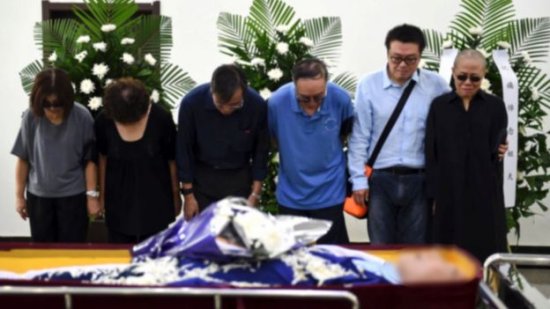 Chinese activist and Nobel Peace Prize winner Liu Xiaobo has been cremated in a private ceremony in the north-eastern city of Shenyang.

His ashes were later scattered in the sea, his brother said.

Mr Liu, who had been serving an 11-year prison term for “subversion”, died of liver cancer on Thursday. He was China’s most prominent dissident.

His wife, Liu Xia, has been under house arrest since 2010. But she attended Saturday’s funeral.

An official said that Mr Liu’s remains were cremated “in accordance with local customs and the wishes of the family”.

Mozart’s Requiem was played at the ceremony, he said.

Photographs shared by local authorities showed Mrs Liu and other mourners beside Mr Liu’s open coffin, which was surrounded by white chrysanthemums, a symbol of grief in China.

She was visibly distressed.

Later pictures showed Mrs Liu and others on a ship apparently throwing flowers into the sea, during a ceremony to scatter her husband’s ashes.

Supporters of Mr Liu say the authorities wanted to avoid providing a burial ground where he could be remembered.

“It was a deliberate move by the Chinese government to hastily arrange the funeral so that no-one can visit his body, which would evoke the most memories,” said activist Hu Jia, quoted by the South China Morning Post.

The official who spoke about the funeral said he believed Mrs Liu had been freed, but Mr Liu’s lawyer, Jared Genser, rejected this claim and said Mrs Liu had been held “incommunicado” since her husband’s death.

“The world needs to mobilise to rescue her – and fast,” he wrote in a statement. On Friday, the committee that awards the Nobel Peace Prize said it was “deeply worried” about her and urged China to free her.

At a government-organised news conference, Mr Liu’s older brother Liu Xiaoguang said the funeral arrangements had been carried out in accordance with the family’s wishes.

Liu Xiaoguang is regarded by Mr Liu’s friends as someone who had long disagreed with his brother’s views.

Liu Xiaobo was awarded the Nobel Peace Prize in 2010 for his non-violent struggle for human rights in China.

Related Topics:AsiaChinaLiu Xiaobo
Up Next