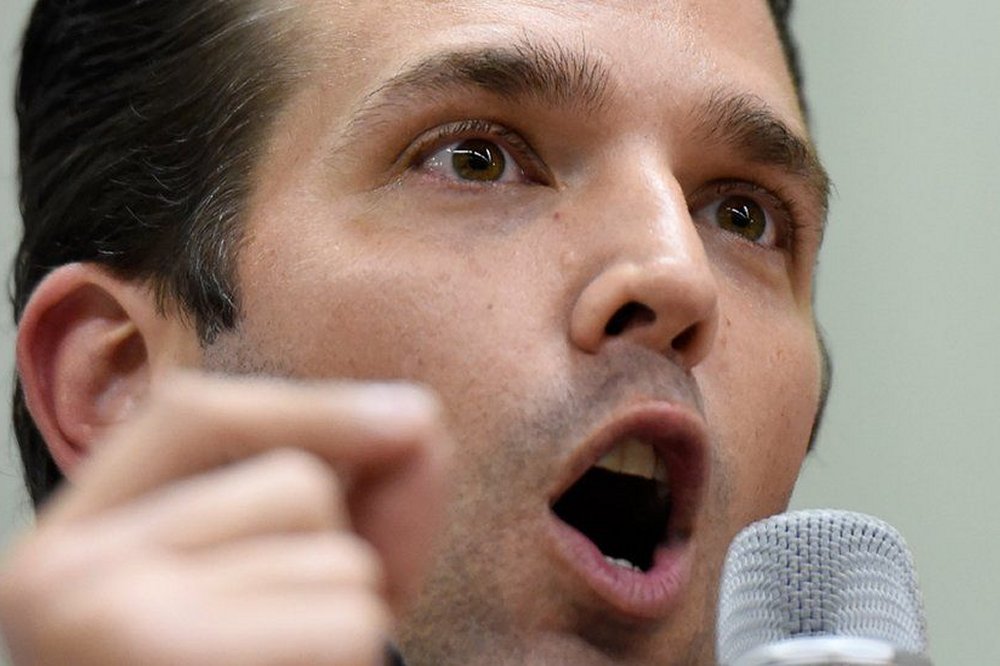 Donald Trump has defended his son over a meeting with a Russian lawyer during his presidential campaign, calling him “open, transparent and innocent”.

He tweeted hours after Donald Trump Jr spoke to Fox News about the meeting he was told would offer Kremlin-linked information about Hillary Clinton.

Critics accuse Mr Trump Jr of intent to collude with the Russians, and believe he may have broken federal laws.

Mr Trump Jr told Fox News the meeting was “such a nothing”.

However, he accepted he should have handled it differently.

Earlier on Tuesday Mr Trump Jr released the email exchange that brought about the meeting, after being informed the New York Times was about to publish it.

US officials are investigating alleged Russian meddling in the US election.

Since he was elected, President Trump has been dogged by allegations that Russia tried to sabotage Mrs Clinton’s campaign.

He has denied any knowledge of this and Russia has also repeatedly denied interfering.

What do the emails reveal?

At that time, his father was the presumptive Republican nominee and heading towards an election fight against his Democratic rival.

The meeting was reportedly arranged by Russian businessman Aras Agalarov and his son Emin, a pop star who was managed for a time by Mr Goldstone.

One email from Mr Goldstone said the information they had been promised was “obviously very high-level and sensitive information but is part of Russia and its government’s support for Mr Trump”.

Mr Trump Jr’s response to it was: “If it’s what you say I love it.”

What did Trump Jr say about the meeting?

Donald Trump Jr told Fox News’ Sean Hannity that he did not tell his father about last year’s meeting: “It was such a nothing. There was nothing to tell.

“I mean, I wouldn’t have even remembered it until you started scouring through this stuff. It was literally just a wasted 20 minutes, which was a shame.”

In retrospect, he would have done things a little differently, Mr Trump Jr told Fox News, but he defended his actions.

“This is before the Russia mania, this is before they were building this up in the press. For me this was opposition research, they had something you know maybe concrete evidence to all the stories I’d been hearing about.”

But the meeting went nowhere, he said, and it was apparent Mrs Clinton was not the subject.

He could not vouch for the information he was sent, he said.

“Someone sent me an email. I can’t help what someone sends me. I read it, I responded accordingly, and if there was something interesting there, I think that’s pretty common.”

Just hours after Mr Trump Jr set up the meeting with Ms Veselnitskaya, his father promised to give a “major speech” about Mrs Clinton.

In a speech on Tuesday 7 June 2016 – the same day Mr Trump Jr arranged by email to meet the Russian lawyer – his father said he would discuss “all of the things that have taken place with the Clintons” a week later.

“I think you’re going to find it very informative and very, very interesting,” the then-Republican candidate added. He did not follow up on the promise.

A day before the 9 June meeting, the website DCLeaks, which US intelligence officials say Russians used in their election interference, began publishing documents related to Clinton donors.

What has the other reaction been?

President Trump has defended his son twice now in tweets. His most recent says Donald Trump Jr did a “good job” on Fox News and called it “the great Witch Hunt in political history. Sad!”

On Tuesday, he described his son as a “high quality person”, something that spawned a number of memes on social media.

Kremlin spokesman Dmitry Peskov denied any link to the Russian lawyer, and Ms Veselnitskaya herself has said she was never in possession of information that could have damaged Mrs Clinton.

Mr Goldstone has also denied any knowledge of involvement in the election by the Russian government.

Legal experts say that Mr Trump Jr could fall foul of campaign finance laws, which prohibit accepting anything of value from a foreign government or foreign national.

His apparently enthusiastic response to the offer of information about Mrs Clinton could also breach conspiracy laws.

But journalist and USA Today contributor Michael Wolff told the BBC’s Newsnight on Tuesday that that there was no evidence of criminal activity.

“There’s no crime that we know of yet,” he said. “But we certainly are a big step forward to the circumstance in which there could be collusion in the commission of a crime. And that’s important because just to establish collusion, as the Trump people are desperately saying today, is not a crime.”

The idea that Mr Trump Jr could fall foul of electoral law was also downplayed by Mr Wolff.

“I think that’s a kind of a sideshow at this point. One of the other aspects… is the media response to this which is a paroxysm of glee and delight and I-told-you-so and game over.”

Few Republicans have yet responded to the latest developments, although one Trump loyalist, Lee Zeldin, tweeted that though he wanted the president to succeed “that meeting… is a big no-no”.

The highest-ranked Democrat on the House Intelligence Committee, Adam Schiff, called the revelations a “very serious development” and said he wanted everyone involved in it to testify to the panel.

There are several congressional committees looking into Russian interference and whether anyone on the Trump team helped, as well as a special counsel.