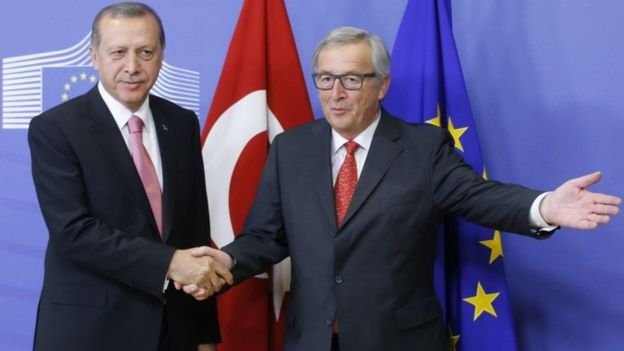 Turkey will find it “comforting” if the EU says it cannot be accepted as a member, President Recep Tayyip Erdogan has told the BBC.

Speaking to HARDtalk’s Zeinab Badawi, he said Turkey was “able to stand on its own two feet”.

He also denied that the country has jailed 150 journalists, saying only two people with press cards were in prison.

His claim came as Turkey extended the detention of the local director of Amnesty International and nine others.

Idil Eser was detained on 5 July during a digital security and information management workshop, along with seven other rights activists and two foreign trainers.

The 10 are accused of being members of an “armed terrorist organisation” – although Amnesty says it is unclear which one.

Their detention has raised alarm internationally, increasing fears that freedom of expression is being suppressed under President Erdogan.

The EU wastes our time

This concern has bedevilled the country’s bid for EU membership, while the president has accused the bloc of wasting Turkey’s time.

“We are loyal to our word,” he told the BBC. “If the EU, bluntly says, ‘We will not be able to accept Turkey into the EU’ this will be comforting for us. We will then initiate our plan B, and C.

“The European Union is not indispensable for us… We are relaxed.

“Once upon a time when I was in my first term as prime minister, Turkey was being described as a country which has accomplished a silent revolution during European Union leaders summits. But now the same EU not only doesn’t invite us to the leaders’ summits any more – they also waste our time. This is the situation right now.”

Mr Erdogan said the majority of Turks “don’t want the EU anymore” and believe its approach to Turkey is “insincere”.

“Despite all this we will continue being sincere with the EU for a little more time,” he said.

“We will see what that brings for us.”

No-one is jailed because of journalism

The president was speaking almost a year to the day since an attempted military coup unfolded in Turkey on 15 July 2016. At least 260 people died when rogue soldiers bombed government buildings and drove tanks into civilians.

In the 12 months since then, a state of emergency has been in place across the country. More than 50,000 have been arrested, and 140,000 dismissed or suspended.

Some 160 media outlets have been closed down, and 2,500 journalists or media workers have been sacked from their jobs. According to the Committee to Protect Journalists, Turkey is the biggest jailer of journalists in the world.

President Erdogan disputed this figure, however, telling the BBC: “See, you are now speaking more than me – you have more freedom than me. You don’t grant me the right to freedom right now. You are doing an interview with me, but you don’t give me the opportunity to speak…

“No-one is jailed because of journalism here, we have to acknowledge that. Opposition journalists write a lot of insulting articles about me. Even recently they did it during the march [against President Erdogan’s government, which ended on Sunday]. Those insulting articles are still out there.

The president added: “They have a journalist’s badge but this is not the official press card, so with that badge they claim to be journalists. The number is not 170 as you have just said… These are lies. We have said this repeatedly.

“There is only two actual journalists who are in jail right now. Other than this, it is all lies what is said about this issue… Please let’s not deceive the world with these lies.”The 63-year-old claimed his opponents “have infiltrated the judiciary, military, police and the media. This is how they have organised and attempted the coup as a mob. They’ll work together to overthrow a state and then seek refuge as journalist to save themselves. This is not acceptable. We are not afraid of any statements and writings on this issue.”

Turning from Turkey’s internal politics to its role on a wider stage, the BBC asked Mr Erdogan about his strong backing for Qatar, which is under blockade from some of its powerful Arab neighbours over its alleged support for terrorism.

One of the conditions the Saudi-led group has given for lifting the sanctions is that the Turkish military base in Qatar must be closed. Mr Erdogan responded by sending more military personnel.

Asked if he feared the tensions could escalate into a conflict, Mr Erdogan insisted Turkey wants no part in the stand-off.

“We are not part of these crises. On the contrary, in the Gulf region we want to promote dialogue and peace. We are in a hurry to find a solution here. Turkey is never in favour of Muslim killing Muslim in this region. We don’t want to see Muslim fighting with Muslim. We are fed up with this.