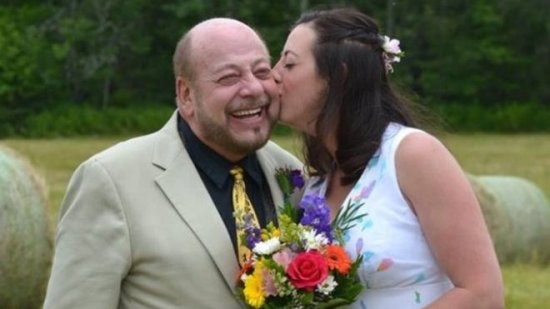 No one likes a dull wedding, but one father-of-the-bride’s speech was a little too electrifying at his daughter’s ceremony last weekend.

JP Nadeau was reportedly struck by lightning mid-sentence in his apple orchard in New Brunswick, Canada.

“And just as I told my new son-in-law ‘You’re a lucky guy’ – Boom!” he told the Canadian Broadcasting Corporation.

Aside from a small scar on his thumb, Mr Nadeau says he was unscathed and the wedding proceeded.

Storm clouds had gathered behind him at the ceremony on 8 July, he said, and his daughter saw lightning strike the ground nearby.

“I had the microphone and the shock jumped into the sound system and my hand just lit up and I saw the spark,” he told the CBC.

“And I’m looking at my hand and it’s all flared up… It was like I was holding a lightning bolt in my hand, it was amazing.”

Everyone was stunned at first, but that didn’t stop the happy couple from continuing with the festivities.

“It was a beautiful wedding,” Mr Nadeau’s wife, Maggy Thomas, told the CBC.

“But that was pretty terrifying for a second.”

Mr Nadeau says he’s a lucky-unlucky man – in 2015, a cruise ship he was working on near the Falkland Islands caught fire, and he was rescued by the British Royal Air Force.

“I’ve had lots of brushes with death,” said Mr Nadeau. “But death keeps ignoring me.”