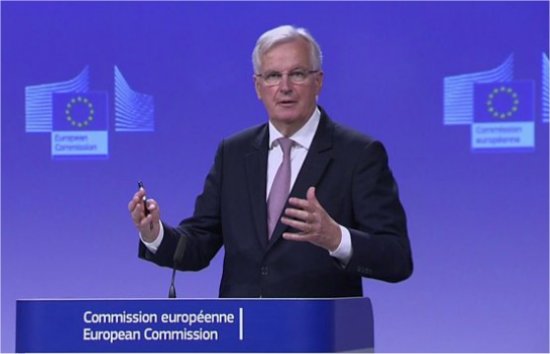 The EU’s top Brexit negotiator has said there are still major differences between the EU and UK on the rights of EU citizens living in Britain.

“The British position does not allow those persons concerned to continue to live their lives as they do today,” Michel Barnier said.

Mr Barnier said the European Court of Justice (ECJ) must have jurisdiction to guarantee citizens’ rights.

He also said it was essential that the UK recognise its financial obligations.

If Britain did not accept it had some financial obligations, there would be no basis to discuss other issues, he said.

Ahead of the second round of talks next week, Mr Barnier said the EU had made its stance on the issues clear and was waiting on Britain to do the same.

“Our team is ready,” he said. ” I’m ready. I’m very prepared and willing to work on this very quickly – night and day, the weekend.”

“We want EU citizens in Britain to have the same rights as British citizens who live in the EU,” he told a news conference.

That would require the ECJ to be the “ultimate guarantor” of those rights, he said, because Britain could simply change its laws later, creating uncertainty.

UK law also imposes restrictions in areas such as reuniting families across borders, he said – something which was not applied to UK citizens living in Spain, for example.

Mr Barnier also said that those rights – along with the “divorce payment” and border issues – must be dealt with before future UK-EU trade could be discussed.

The financial payment the EU says will be owed to cover the UK’s commitments is also a key point for Mr Barnier. Estimates have put the amount at anywhere from €60bn to €100bn (£53-89bn).

Asked about UK Foreign Secretary Boris Johnson’s comment that the EU could “go whistle” over the demand, Mr Barnier replied: “I’m not hearing any whistling. Just the clock ticking.”

He denied that the EU was holding the UK government to ransom, and said it was simply a matter of “trust”.

“It is not an exit bill, it is not a ransom – we won’t ask for anything else than what the UK has committed to as a member,” he said.

Mr Barnier also announced he would meet other key politicians on Thursday who were not part of Theresa May’s government – including opposition leader Jeremy Corbyn, representatives from the House of Lords, and the first ministers of Scotland and Wales.

“I have always made clear that I will listen to different points on view in the British debate,” he said.

“Of course, I will only negotiate with the UK government,” he added.