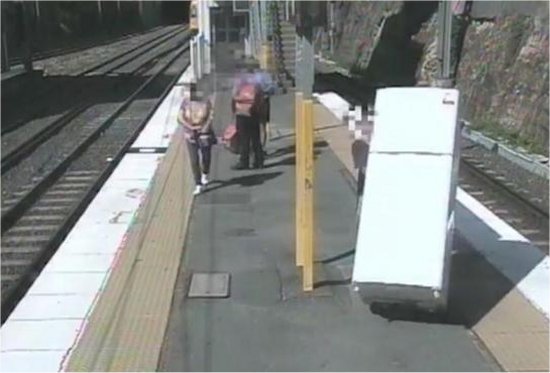 Transit officials in Australia said a man was fined nearly $200 for bringing a refrigerator onto a commuter train in Queensland.

Queensland Rail posted security camera footage to Facebook showing the man wheeling the fridge on a dolly from a rail overpass to an elevator at a Brisbane station.

The man then rolls the fridge to the Bowen Hills platform and onto a waiting train.

The footage shows the man was directed back off the train by security guards, who issued the man a $192 fine for bringing an oversized item onto the train. He was issued an additional fine for fare evasion, officials said.

“I hope he decided to book a removalist as we would encourage people to do, or call up one of his mates with a ute,” Queensland Rail spokeswoman Justine Scarff told the Australian Broadcasting Corp.

The Facebook video included footage of a second incident where a man attempted to bring a full-sized couch onto a train.

“We obviously need to be mindful of other people traveling; trains are for people, they aren’t for fridges and couches unfortunately,” Scarff said.

$30,000 reception donated to homeless after US wedding cancelled