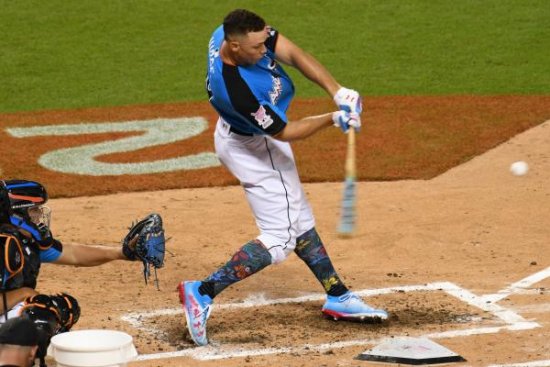 The signs at Marlins Park proclaimed, “All Rise for the Judge.”

Presiding on Monday night was the honorable Aaron Judge, a towering figure at 6-foot-7 and 280 pounds, and he made hard contact with his bat instead of a gavel, winning the Home Run Derby.

Judge won 11-10 in an anticlimactic final against Minnesota Twins third baseman Miguel Sano. There was 1:53 left on the clock when the New York Yankees rookie passed Sano for the win.

“I had a lot of fun,” said Judge, a right fielder who leads the majors with 30 homers at the All-Star break. “It was an awesome atmosphere (at Marlins Park). I hope the fans enjoyed the show.”

And what a show it was, especially in the first round.

A heavyweight matchup between Judge, the second seed, and Miami Marlins right fielder Giancarlo Stanton, the defending champion and top seed, never materialized. Stanton, the National League co-leader in home runs with 26, was upset in the first round by Yankees catcher Gary Sanchez, seeded eighth.

But Stanton, who at 6-6 and 250 pounds is bigger than just about every slugger in the game except for Judge, did pound one pitch for a massive 496-foot homer.

Judge went even further with a 513-foot blast in a 13-12 semifinal win over third-seeded Cody Bellinger of the Los Angeles Dodgers. Judge wound up with three 500-plus-foot homers.