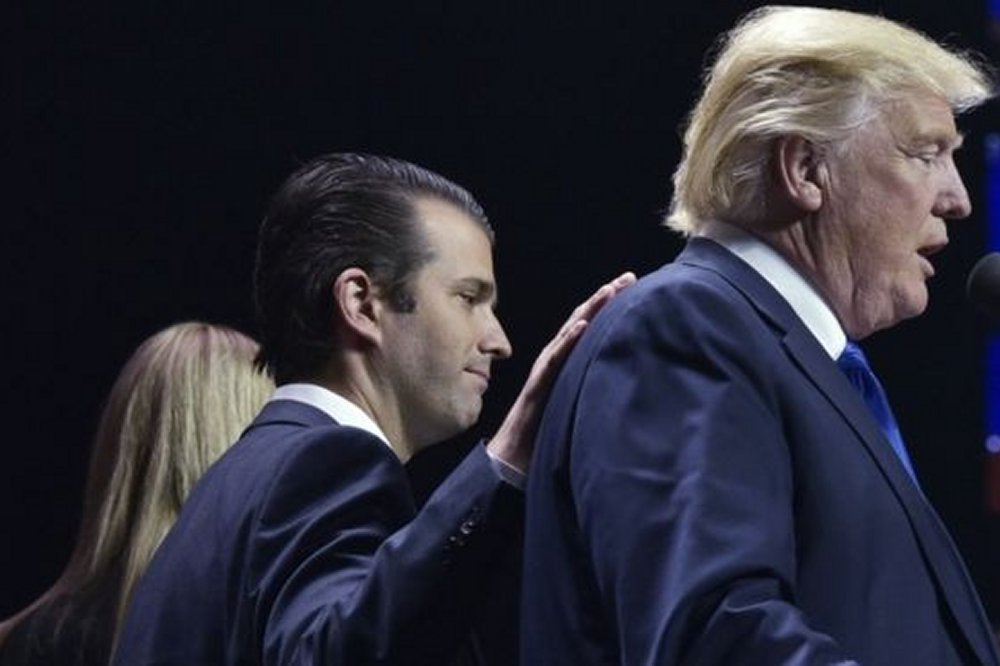 Donald Trump Jr was told that material on Hillary Clinton offered by a Russian lawyer was part of a Russian government effort to help his father’s election campaign, the New York Times has said.

Publicist Rob Goldstone, who arranged the June 2016 meeting with the lawyer, stated this in an email, it reported.

Mr Trump Jr has defended attending the meeting, saying the promised damaging information did not materialise.

US officials are investigating alleged Russian meddling in the US election.

The paper reports that three people with knowledge of the Goldstone email said it indicated the Russian government was the source of the potentially damaging information on Mrs Clinton.

But the paper says there was no mention in the email of any wider effort by the Russian government to interfere in the election, nor was there any indication of a link to the hacking attack on the Democratic Party that was first reported a week after the meeting.

Mr Goldstone has previously denied any knowledge of involvement by the Russian government.

Adam Schiff, the top Democrat on the House Intelligence Committee, told MSNBC that the New York Times report was “a very serious development”.

“It all warrants thorough investigation. Everyone who was in that meeting ought to come before our committee.”

Mr Trump Jr’s statement on the matter on Sunday did not indicate he had been told of any Russian government involvement.

Lawyer Alan Futerfas, hired by Mr Trump Jr to represent him in the Russia-related investigations, described reports of the meeting as “much ado about nothing” and said his client had done nothing wrong.

The president’s son said he was “happy to work with the committee to pass on what I know”.

It is thought to be the first confirmed private meeting between a Russian national and members of President Trump’s inner circle.

After the New York Times first reported the meeting on Saturday, Mr Trump Jr released a statement which confirmed that it had taken place but did not mention whether it was related to the presidential campaign.

However, another Times report, on Sunday, said Mr Trump Jr had agreed to the meeting after being offered information that would prove detrimental to Mrs Clinton.

In his statement on Sunday, Mr Trump Jr said he had been asked to meet “an individual who I was told might have information helpful to the campaign”.Mr Trump Jr’s statement continues: “The woman stated that she had information that individuals connected to Russia were funding the Democratic National Committee and supporting Mrs Clinton.

“Her statements were vague, ambiguous and made no sense. No details or supporting information was provided or even offered. It quickly became clear that she had no meaningful information.”

Mr Trump Jr said the lawyer then changed subject to the Magnitsky Act and “it became clear to me that this was the true agenda all along”.

Adopted by Congress in 2012, the Magnitsky Act allows the US to withhold visas and freeze financial assets of Russian officials thought to have been involved in human rights violations.

Ms Veselnitskaya is married to a Moscow government official and her clients include companies and individuals said to be close to the Kremlin. She has been at the forefront of a campaign – backed by the Russian state – to overturn the act.

But she has denied ever working for the Kremlin and on Saturday said that “nothing at all was discussed about the presidential campaign” at the meeting.

In an interview on Monday, Mr Goldstone backed Mr Trump Jr’s version of the meeting, saying Ms Veselnitskaya offered “just a vague, generic statement about the campaign’s funding” which was “the most inane nonsense I’ve ever heard”.

On Monday, Mr Trump Jr tweeted sarcastically: “Obviously I’m the first person on a campaign to ever take a meeting to hear info about an opponent…” He also denied issuing conflicting statements.

And he linked to a piece in the New York Post headlined “The Times ‘exposé’ on Donald Trump Jr is a big yawn”.

A spokesman for President Trump’s legal team said the president was “not aware of and did not attend” the meeting.