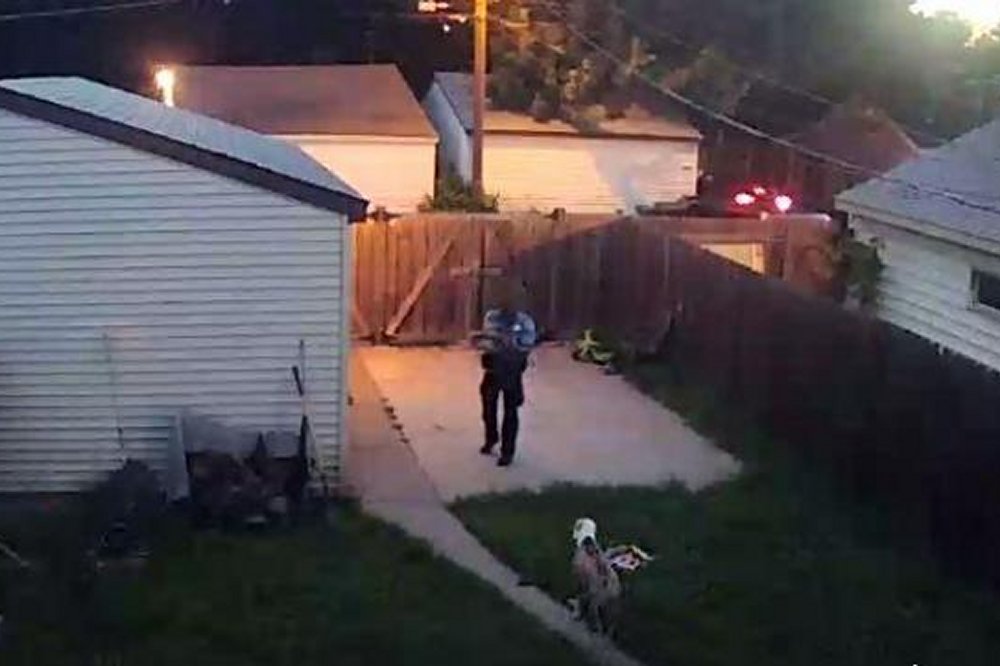 A Minneapolis police officer was caught on video shooting two dogs when he entered the backyard of a home to check on a burglary alarm.

The dogs’ owner, Jennifer Lemay, posted the video to Facebook Sunday and said the dogs did not pose a threat to the officer.

“[Minneapolis’] finest shooting my dogs that weren’t attacking or charging at him!” she wrote.

“My dog had stopped. My dog wasn’t even facing him to charge him or be in an aggressive manor to him. You still shot him,” Lemay told KARE.

Both of the dogs survived the shooting, but will require extensive surgery and veterinarian care. Lemay said that she and her four children have raised the dogs, Ciroc and Rocko, since they were puppies. The dogs are also physician-prescribed emotional support animals for her two sons, who have anxiety.

According to the Minneapolis Star Tribune, the Lemays were out of town on a camping trip as a watched the dogs. But her eldest daughter, 18, returned home early to work the next day and brought her 13-year-old sister along. One of the daughters set off the buglary alarm when entering the home at 8:50 p.m. Saturday, but the mother deactivated it on her cell phone at 8:54.

Two Minneapolis police officers arrived at 9:15 p.m. But neither knocked on the front door. Instead, one stood in front of the home while the other climbed over the fence in the backyard.

The surveillance video, which has no sound, shows the officer walking in the backyard when Ciroc, a white dog, trots toward him and then stops several feet away. Ciroc looks side to side and takes a step forward, at which point the officer fires a bullet that hits the dog’s jaw. Ciroc flails on the ground while Rocky, the other dog, runs toward the officer. The officer then fires another shot at Rocky, who runs back the other way.

After shooting the dogs, the officer hops over the fence.

“We are aware of the recent incident involving MPD officers responding to an audible residential burglary alarm and while at this call an MPD officer discharged their firearm, striking two dogs belonging to the homeowner,” police said in a statement. “Anytime an officer discharges their firearm in the line of duty there is an investigation. We are in the process of reviewing the video posted online, as well as the officer’s body camera video.”

Lemay has created a GoFundMe page to help pay for the dogs’ medical bills.

The video of the shooting below might be disturbing.

A mother killed in mass shooting at baby shower